PARIS (92 News) – The final of Euro Cup 2016 will be played between host France and Portugal at Stade de on Sunday (today). Portugal take on two-time winners and host France in the 2016 final. Hosts have won last ten meetings with Portugal, dating back to 1975. Portugal, 2004 finalist, will be relying on their captain Cristiano Ronaldo to help them lift their maiden major title whereas hosts will hope Antoine Griezmann , top scorer of the tournament, to help them claim their third European title. Hosts France are aiming to win their third European Championship on Sunday when they face Portugal in the Euro 2016 final with the outcome potentially hinging on the teams' attacking talismans Cristiano Ronaldo and Antoine Griezmann. France, who have beaten Portugal in their last 10 confrontations since 1978, have previously lifted the trophy in 1984 and 2000. 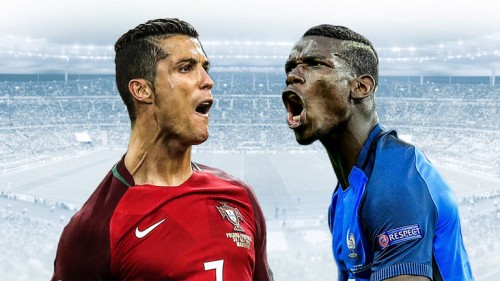 Portugal will be out to spoil the French party by claiming a first major tournament trophy after their most recent final appearance ended in a bitter loss to Greece as hosts of Euro 2004. The final will feature a clash of styles as Didier Deschamps' pacey, attacking French team face Fernando Santos's tactically astute and organised Portugal side. The outcome could depend heavily on the two men wearing the number seven shirt -- Portugal's Ronaldo and France's Griezmann, who faced each other in the Champions League final six weeks ago. On that occasion, Ronaldo's Real Madrid beat Griezmann's Atletico on penalties. Griezmann is the tournament's top scorer with six goals, while Ronaldo has notched three. Should France triumph, it will be their third major tournament success on home soil after they won the European title in 1984 and the World Cup in 1998.