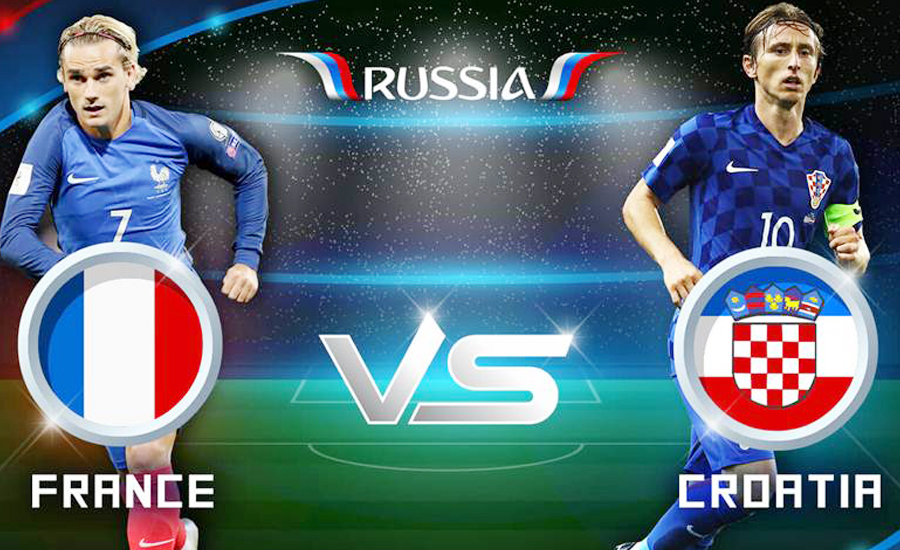 MOSCOW (Reuters) - Croatia can cause a massive upset but France are favourites as Moscow basked in sweltering summer sun and the world’s spotlight on the big day of the World Cup final. A nation of just over four millions are 90 minutes away from what could be a pleasant shock for them if Croatia beat France at the Luzhniki Stadium (kick off 1500GMT) on Sunday to win a first-ever World Cup. “If Croatia can win then we will all be able to dream of doing it,” Belgium coach Roberto Martinez said on the eve of the game, spelling out that the dominance of the tournament by the larger, established footballing super powers could be at an end. The inspiration of Luka Modric, the anchor provided by Ivan Rakitic and attacking prowess of Mario Mandzukic will all be needed again if Croatia are to continue their fairytale run and lift the gold-plated trophy. They will also have to dig deep to overcome the certain fatigue that has comes with having been forced into extra time in their last three matches, winning two on post-match penalties. It contrasts with the slick progress of France, who beat Argentina, Uruguay and Belgium in the knockout stages to earn their status as favourites. They have had to deal with accusations of uninspired tactics but coach Didier Deschamps has shrugged off the criticism and told his players to be calm, confidence and to concentrate. “There’s nothing more beautiful, as a professional football player, than to play in the World Cup final,” he said at the pre-match news conference. Deschamps could become only the third to win soccer’s top prize as both player and coach, having captained France in their previous triumph 20 years ago. Streets around the stadium filled up from early as fans of the two nations, plus others lucky enough to have secured a ticket, converged on the 80,000-seater stadium. Moscow’s ornate metro, which has offered free rides to spectators, was again a carnival of colour and noise as excited fans headed to the venue where strict security was in place. Elsewhere in the city, streetwalk cafes were filled with supporters clad in Croatian and French colours, plus those of other countries, enjoying a late breakfast or early lunch before heading to the imposing stadium, on the banks of the Moskva River. Outside the imposing hotel where FIFA officials and guests were staying, a fleet of black cars waited to take them to the venue while watchful police stood conspicuously outside. The presidents of both Croatia and France will again be in the stands to support their teams along with pop stars such as Mick Jagger and a host of the game’s legends. But absent will be Croatia striker Nikola Kalinic, sent home in ignominy in the first week of the World Cup after refusing to come on as a substitute in the team’s opening game against Nigeria. He will likely forever be known as the player who sat sulking at home while his teammates wrote history for their country.