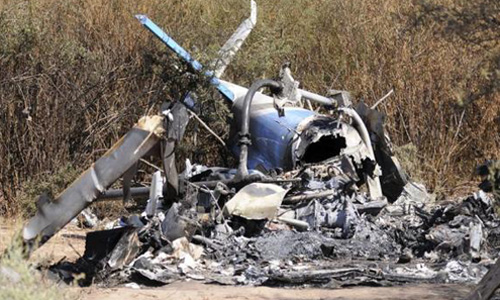 BUENOS AIRES/PARIS - France mourned on Tuesday the deaths of three sports stars who were among 10 people killed when two helicopters collided in a remote region of Argentina during the filming of a reality TV show. Investigators removed the bodies of Olympic swimmer Camille Muffat, yachtswoman Florence Arthaud and boxer Alexis Vastine from the charred wreckage of the two aircraft, but said it was still unclear what caused the accident on Monday afternoon in the rugged western province of La Rioja. There were no survivors. Amateur footage taken from the ground showed the two helicopters flying in tandem at low altitude when one appears to deviate into the path of the other. Both helicopters then plunge to the ground. A second video showed dozens of people rushing through the heavy undergrowth toward the helicopters' burning wreckage. The accident occurred around 5.15 p.m. local time (2015 GMT). French President Francois Hollande paid tribute to the athletes he said had "made France shine". "They are dead because they wanted to push the boundaries. They wanted to make new exploits known to the world, make people aware of new countries and regions," Hollande said. In Paris, an involuntary manslaughter investigation has been opened, an automatic procedure when French citizens are killed abroad, a judicial source said. As part of the TV show, other contestants were standing blindfolded on the ground a few hundred meters from the helicopters' flight path, French media reported. They ran to the crash site but could not extinguish the fire, an assistant to the contestants told French broadcaster RFI. A magistrate judge at the site said all 10 bodies had been retrieved from the helicopters' mangled ruins and were being taken to a morgue in the provincial capital. Two pilots and several members of the ALP-TV production company involved in filming the adventure show "Dropped" for private TV station TF1 (TFFP.PA) were among the dead, officials said. A spokesman for Argentina's Air Accident Investigation Board said it was too early to determine if human error, mechanical failure or something else was to blame. Two French investigators, as well as two technical experts, were dispatched to Argentina to help gather evidence. "CHAMPIONS" "The whole of French sport is in mourning because we have lost three huge champions," Thierry Braillard, junior minister for sports, town and youth affairs, told RTL radio. "Florence Arthaud - we all knew her as the 'Fiancee of the Atlantic'," he said, referring to a nickname Arthaud earned through many daring voyages, including a 1990 record for the fastest solitary Atlantic crossing. TF1 issued a statement expressing solidarity with the victims' families. French media said filming had been suspended and the crew and other contestants were heading back to France. French news channels and social media were awash with tributes for the three stars. Guy Muffat, Camille’s father, told RTL radio his daughter had had a fantastic life that was cut short too early. "She had some beautiful qualities. She was frank, honest and a patriot. France meant something for her. Everyday she showed great tenacity an courage. How could you not be proud of her?" Muffat said. "Dropped" involves contestants being left in the wilderness and using their skills to find their way back to civilization. The collision marked the second time in two years that a reality show produced by ALP for TF1 had been hit by tragedy. In April 2013 the doctor charged with looking after contestants in the long-running "Koh-Lanta" endurance show committed suicide after one of the competitors died following one of the tests, complaining of heart pains. Arthaud, 57, was one of the first women to carve a place for herself in the top levels of sailing. She had a brush with death in 2011, when she fell off her boat into the Mediterranean. Rescuers whisked her out after she called her mother by mobile phone. Muffat, 25, won 400 meters freestyle gold at the 2012 London Olympics. Vastine, 28, won bronze at the Beijing 2008 Olympics. "I am sad for my friends, I’m shaking, I’m horrified, I can’t find the words," tweeted Sylvain Wiltord, an ex-footballer for English Premier League club Arsenal and a fellow cast member. – Reuters