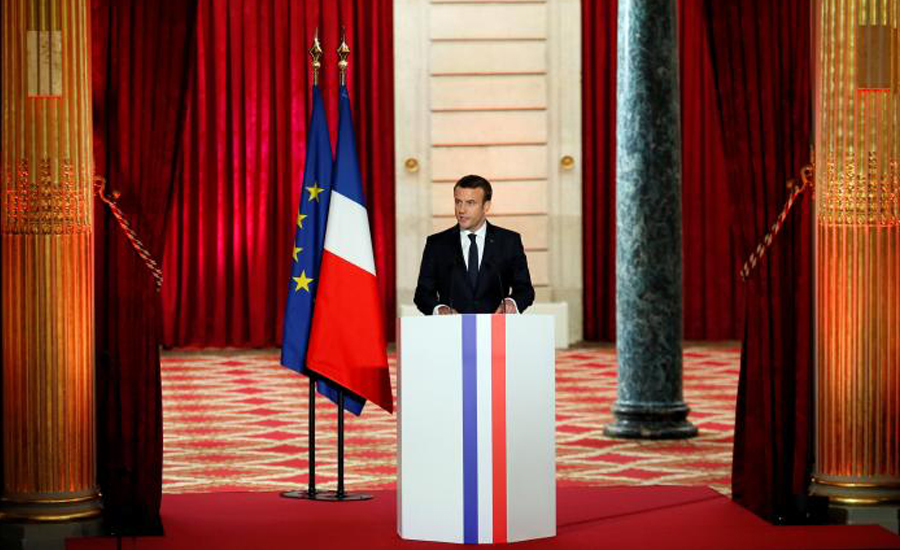 PARIS - Emmanuel Macron took power as president of France on Sunday, vowing to restore the country's status in Europe and the world and heal divisions in society -- a nod to the bitter campaign the pro-EU centrist fought to defeat a far-right leader.

The 39-year-old former investment banker, unknown to the wider public three years ago and whose May 7 election marked a meteoric rise to power, was inaugurated leader of the world's fifth-largest economy in a solemn Elysee Palace ceremony.

In his first words after taking office, he pledged to restore France's standing on the world stage, strengthen national self-confidence and heal divisions that the bitterly-fought campaign had opened up.

Macron beat the National Front's Marine Le Pen in a May 7 run-off vote but the long campaign exposed deep divisions over France's role in Europe, immigration, and policies to revive a sluggish economy bedevilled by high unemployment.

"The division and fractures in our society must be overcome. I know that the French expect much from me. Nothing will make me stop defending the higher interests of France and from working to reconcile the French," Macron declared.

Although his victory over Le Pen was comfortable, almost half of France's 47 million voters chose candidates with views opposed to Macron's in the first round of the election.

Many say they feel dispossessed by globalisation as manufacturing jobs move abroad and as immigration and a fast-changing world blur their sense of a French identity.

A convinced European integrationist unlike Le Pen and other leadership candidates, Macron went on: "The world and Europe need more than ever France, and a strong France, which speaks out loudly for freedom and solidarity."

Seeking closer ties with EU anchor nation Germany, Macron will meet Chancellor Angela Merkel in Berlin on Monday. He will ram home the message that the European Union is resilient despite Britain's vote to leave and a spate of financial and migration crises that have boosted the far right.

Monday will also see Macron name his prime minister, whose job will be to pilot liberalising reforms aimed at reducing joblessness and reviving economic growth.

Macron becomes the youngest post-war French leader and the first to be born after 1958, when President Charles de Gaulle put in place the country's Fifth Republic.

In a ceremony full of pomp, he was presented with what is effectively his chain of office -- a heavy golden necklace mounted on a red cushion that makes him Grand Master of the National Order of the Legion d'Honneur.

But Macron appeared determined to create an impression of personal modesty. Aides went out of their way to emphasise that the dark suit he wore cost about 450 euros or just under $500, and that the lavender outfit worn by his wife Brigitte had been loaned by fashion house Louis Vuitton.

He displayed youthful vigour during the televised proceedings, at one point racing up the Elysee stairs to meet a protocol requirement -- something not all previous French presidents might have managed.

He then chose to be driven by military jeep rather than civilian limousine to the Arc de Triomphe, where he stood in the rain, without coat or umbrella, to light the flame in tribute to France's war dead at the tomb of the unknown soldier -- a powerful reminder of France's role in the NATO defence alliance.

Further underscoring a commitment to France's military and peacekeeping role in the Middle East and Africa, he visited wounded service personnel in the military hospital. Aides have flagged a likely visit to French troops in Mali for next Friday.

Macron's rise, marked by a 21-gun salute at the Esplanade des Invalides, signalled at least a pause in the anti-globalisation trend that elevated businessman Donald Trump into the US presidency and led British voters to choose Brexit.

He later shook hands with well-wishers on the Champs Elysees, not far from where a policeman was shot dead by a gunman in April.

More than 230 people have died in France in attacks claimed by Islamic State over the past two years as the country has taken part in military action against the militant group that controls parts of Syria and Iraq.

Fifteen hundred police were mobilised to ensure security for Macron's inauguration while a large section of Paris was closed to traffic all morning.

Macron assumed power after an hour-long private meeting with outgoing President Francois Hollande, 62, in which official access to France's nuclear missile launch codes was handed over.

Macron, once Hollande's economy minister, then accompanied his former mentor down the red carpet to a waiting car.

He must now try to win a majority in June parliamentary elections for his start-up Republic on the Move (REM) party, which has blown apart traditional French political boundaries.

But Macron may struggle to get the country behind him.

In the first round of voting, more than 45 percent chose Le Pen or other candidates who promised different medicine, such as closing the wealth gap by rolling back globalisation, shutting borders and rejecting the EU.

The business-friendly labour reforms in Macron's programme follow on from policies that helped make Hollande the least popular French president in modern history and killed his chances of a second term by failing to ease unemployment. -Reuters