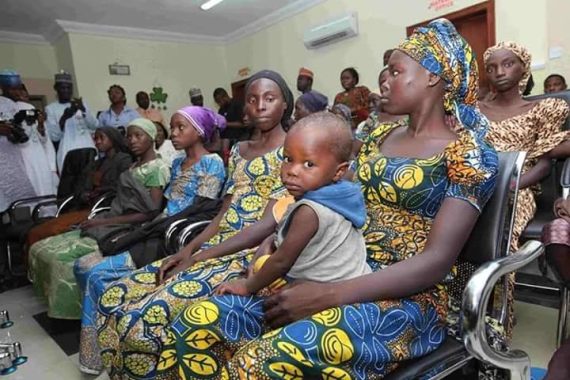 ABUJA - The 21 Chibok schoolgirls freed by Boko Haram militants last month say they were not abused or raped during two-and-a-half years' captivity in northeast Nigeria, a source close to the presidency said on Wednesday. Many girls kidnapped by the Islamist militant group have been used as sex slaves, fighters and even suicide bombers, according to rights groups including Amnesty International. But the 21 freed girls said the militants treated them well while they were held captive, according to a confidential report based on their two-week debriefing prepared for President Muhammadu Buhari and seen by the Thomson Reuters Foundation. The girls, released last month after Switzerland and the Red Cross brokered a deal, are now being held in a secret location in the capital Abuja for assessment by the Nigerian government. State health workers confirmed that the girls were not sexually abused while in captivity, adding that they all tested negative for sexually transmitted diseases, the report said. "The girls said the Boko Haram men always assured them that they would eventually go back home to their families, and were careful about what they said around the girls and how they treated them," said the source, who declined to be named. "They had been fed well and regularly, until the military cut off Boko Haram supplies," the government source added. More than 200 girls were seized from their school in April 2014 in Chibok in Borno state, where Boko Haram has waged a seven-year insurgency aimed at creating an Islamic state, killing thousands and displacing more than 2 million people. Boko Haram has kidnapped hundreds of men, women and children but the abduction of the Chibok girls - some 200 of whom are still missing - prompted outrage worldwide and their plight was publicised using a Twitter hashtag, #bringbackourgirls. NO FORCED MARRIAGE, CONVERSION The daily routine for the girls, who were moved in captivity between the northeastern town of Gwoza and the Sambisa forest, a Boko Haram stronghold, involved personal time in the morning followed by Koranic teaching and cooking meals, the report said. Most of the girls said they were held in makeshift dwellings made of zinc sheets in Sambisa, while those who were married lived with their militant husbands in camps across the forest. The 21 recently released girls said that while the Boko Haram militants advised them to marry and convert to Islam, they were not forced into doing so, according to the report. "The girls said that those of them who did not agree to marry were used as house girls (servants)," the source said. The girls recognised almost all the faces of Boko Haram members on a government most-wanted list, but did not know the militants' names and never saw the Islamist group's established figurehead Abubakar Shekau, according to the source. When shown pictures of 142 of their still missing classmates, the girls said 61 had married Boko Haram militants, eight had died during Nigerian air force strikes, three during childbirth, and one of an unknown cause, the report found. Another Chibok girl and her 10-month-old son were discovered by troops days ago while they were screening escapees from Boko Haram's base in the Sambisa forest. The first of the Chibok girls to be released by Boko Haram, Amina Ali, was freed in May. Ali has since been held in a house in Abuja for what the state has called a "restoration process". She said in August that she "just wanted to go home". Boko Haram controlled a swathe of land around the size of Belgium at the start of 2015, but Nigeria's army has recaptured most of the territory. The group still stages suicide bombings in the northeast, as well as in neighbouring Niger and Cameroon. -Reuters