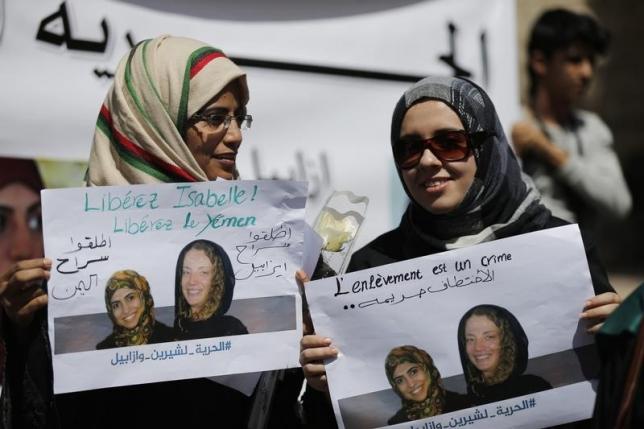 PARIS - A French woman who was abducted in Yemen in February has been freed, the French president's office said in a statement early on Friday, adding that she would come back to France in the coming hours. "Our compatriot Isabelle Prime has been freed tonight," the statement said. "The President of the Republic (Francois Hollande) wishes to thank all those who helped reach this outcome, and in particular Sultan Qaboos Bin Said, the Sultan of Oman," the statement said, without providing any details on her liberation. An official in the president's office said Prime was excepted to be back in Paris late in the morning on Friday. Prime and her Yemeni translator Shereen Makawi were abducted by gunmen in the capital Sanaa on Feb. 24 while the pair were on their way to work. Yemeni tribal sources said in March that Prime would be released, but only Makawi was freed at the time. In recent years tribesmen have taken foreigners hostage to press the government to provide them with services or to free jailed relatives. Yemen is also home to one of the most active branches of al Qaeda, to which tribal kidnappers have reportedly often sold their kidnapped victims. In June, France had authenticated a video that showed Prime, a consultant for Yemen's Social Fund for Development, crouching on sand and in distress. Dressed in black, she made her appeal to French President Francois Hollande and Yemen's Abd Rabo Mansour Hadi in English. "Please bring me to France fast because I’m really, really tired," she had said in the video. "I tried to kill myself several times because I know you will not cooperate and I totally understand." The video first appeared on YouTube on May 4. Since Prime's abduction, the situation in Yemen has become more complex. Hadi fled into exile in March after Iranian-allied Houthi fighters, who had seized the capital Sanaa last September, advanced towards his southern stronghold in Aden. Yemen's Arab neighbours have intervened in the country to halt the advance of the Houthis - Shi'ite Muslims from the north. The Houthis have been pounded with hundreds of air strikes for more than four months, and the raids and other warfare have killed more than 4,000 people. Disease, hunger and water shortages have also contributed to a humanitarian crisis. -Reuters