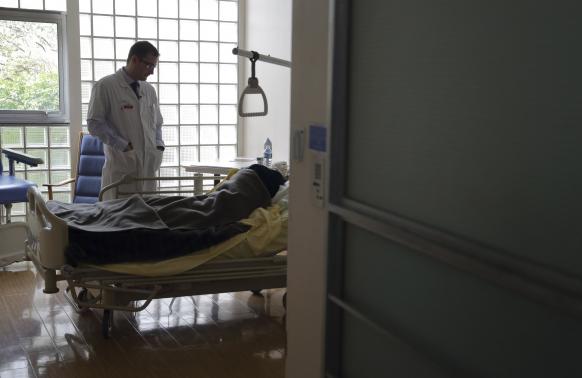 PARIS - France's parliament will debate a bill on Tuesday allowing patients on the brink of death to stop treatment and enter a "deep sleep" until they die, a move some critics say amounts to euthanasia in disguise. If passed, the legislation would give dying patients in the secular but traditionally Catholic country more power over their own treatment. It would also bolster Socialist President Francois Hollande's image as a social reformer after a hotly contested move to legalize gay marriage in 2012. Jean Leonetti, a center-right lawmaker and doctor who authored the law, told Reuters the bill would allow patients with "hours or days to live" to request to be placed under general anesthetic right through to the moment they die. "The patient has to be at the end of their life and suffering despite the treatment given," Leonetti said. "When these elements are present, I (the doctor) am obliged to start sedation that is deep and continues until death." Such a request would effectively let patients set their own death in motion, as the state of deep sleep is irreversible. But proponents say it stops short of assisted suicide and differs from euthanasia in that the time of death cannot be determined. Currently, doctors in France can suspend treatment under some circumstances for patients who ask for it, provided they provide palliative care to reduce suffering, similar to other European countries. In Europe only Belgium, the Netherlands and Switzerland allow euthanasia, with doctors actively assisting patients seeking death. In the United States, Oregon, Washington and Vermont allow doctor-assisted suicide. French law has evolved little since a 2005 reform setting out when doctors could decide to suspend treatment, despite Hollande voicing support for authorizing euthanasia during his 2012 presidential campaign. But the debate returned to the fore last year with the case of Vincent Lambert, a young man who fell into a deep coma after a car crash and whose family members have clashed in French and European courts over whether or not treatment should be pursued. "(Sedation) is not a universal response to suffering at the end of life," said Stephane Mercier, head of the palliative care unit at Paul-Brousse hospital in Paris, adding that doctors were already equipped to ensure minimal suffering at the end of life. But pro-euthanasia campaigners said the bill does not go far enough. "Everyone says there is no suffering but nobody has ever been in that position (near death)," said Jean-Luc Romero, head of the Right to Die in Dignity association. - Reuters