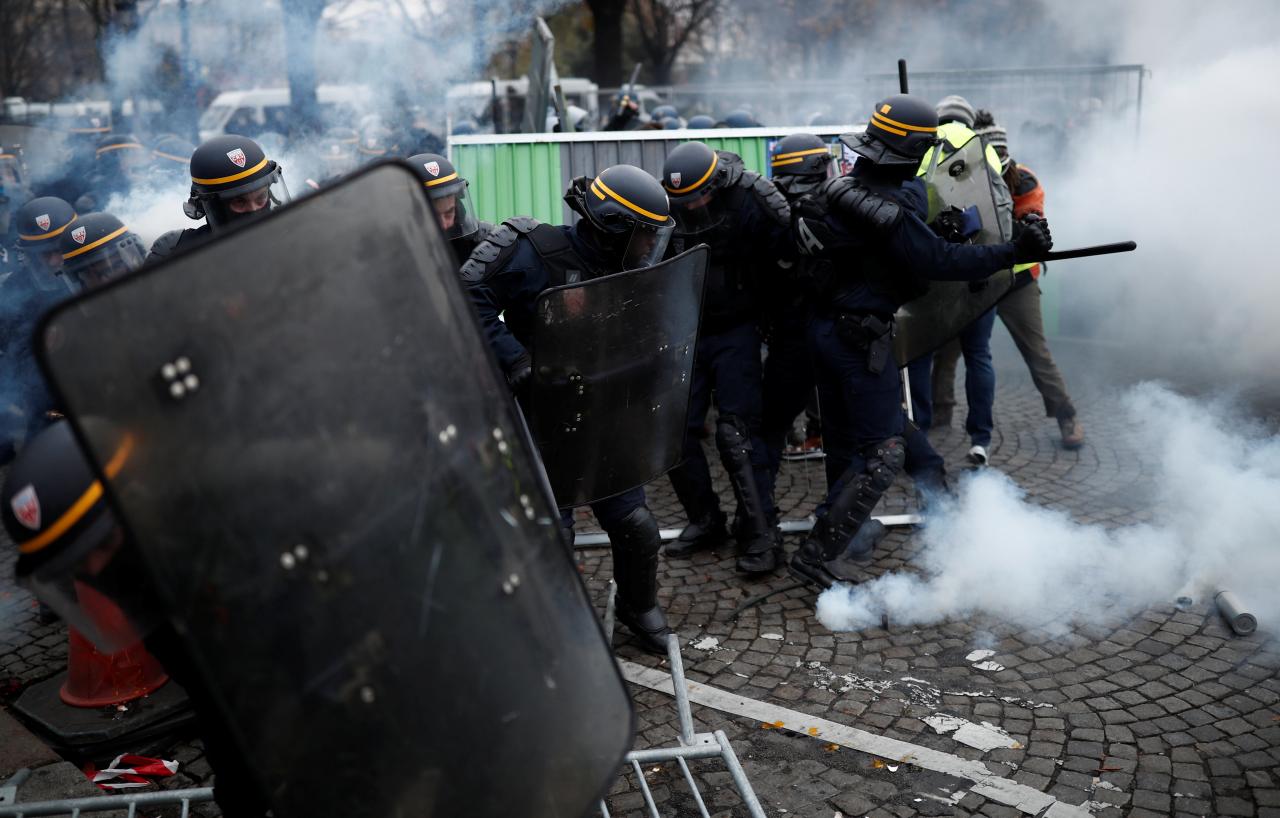 PARIS (Reuters) - Police fired tear gas and turned water cannon on protesters in Paris who are angry over rising fuel costs and President Emmanuel Macron’s economic policies, the second weekend of “yellow vest” protests across France. By midday around 5,000 protesters had converged on the Champs Elysees where some clashed with police sent to prevent them from reaching the president’s Elysee Palace nearby. Protesters sang the national anthem and waved French flags while others carried signs with slogans saying “Macron, resignation” and “Macron, thief”. Others were seen digging up cobbles or building barricades as police confirmed the presence of several hardline groups on one of the city’s best known avenues. Interior Minister Christophe Castaner accused far-right leader Marine Le Pen of fanning the protests. “The ultra-right is mobilized and is building barricades on the Champs Elysees. They are progressively being neutralized and pushed back by police,” he said. In a message on Twitter, Le Pen said she had questioned why no protests were being allowed in the area.”Today Mr Castaner is using this to target me. This is low and dishonest” she said. Protesters are opposed to taxes Macron introduced last year on diesel and petrol which are designed to encourage people to shift to more environmentally friendly transport. Alongside the tax, the government has offered incentives to buy green or electric vehicles. For more than a week, protesters clad in the fluorescent yellow jackets that all motorists in France must have in their cars have blocked highways across the country with burning barricades and convoys of slow-moving trucks, obstructing access to fuel depots, shopping centers and some factories.

Security forces had been concerned that far-left and far-right extremists may infiltrate the demonstrations, escalating the crowd-control challenges. Some 3,000 police officers have been drafted in to work in Paris on Saturday, city hall said, with security forces having to handle a demonstration against sexual violence, a soccer match and a rugby game in the capital on the same day. Last Saturday, when nearly 300,000 people took part in the first yellow vest demonstrations countrywide, retailers’ daily revenue fell 35 percent, according to consumer groups. The unrest is a dilemma for Macron who casts himself as a champion against climate change but has been derided as out of touch with common folk and is fighting a slump in popularity. Despite calls for calm from the government, the yellow vest protests have spread to French territories abroad, including the Indian Ocean island of Reunion, where cars were set on fire. The unrest has left two dead and 606 injured in mainland France, the Interior Ministry said on Thursday. While the movement, which has no leader, began as a backlash against higher fuel prices, it has tapped into broader frustration at the sense of a squeeze on household spending power under Macron’s 18-month-old government. Since coming to power, Macron has seen off trade union and street demonstrations against his changes to the labor rules, and overhauled the heavily indebted state rail operator. Foreign investors have largely cheered his pro-business administration. But political foes have dismissed him as the “president of the rich” for ending a wealth tax, and voters appear to be growing restless, with the 40-year-old president’s popularity slumped at barely 20 percent.