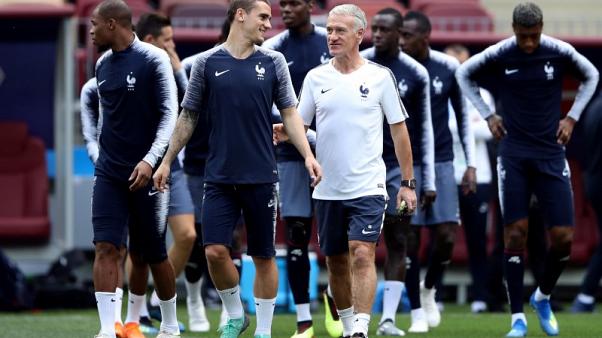 MOSCOW (Reuters) - Russia is French superfan Clement Tomaszewski’s eighth World Cup; he thinks it’s the best yet in terms of welcomes. But it may also be his last. In Moscow ahead of France’s final Group C game against Denmark on Tuesday, the pensioner who sports a French jersey emblazoned with the name by which he has become famous at home ,“Clement d’Antibes” attended his 253rd match of Les Bleus in Ekaterinburg on Thursday. They beat Peru 1-0. His obsession goes back to 1982, when he took a friend’s spot to a trip to the World Cup finals in Spain. “Bilbao, France-England and we lost 3-1. And I think that it was there that I caught the bug,” he told Reuters after a spot of tourism taking pictures of Moscow’s Bolshoi Theatre. What he loved was the ambience, good spirits between French and English fans, which he says has animated his travels ever since, along with curiosity about the countries he has visited. Clement d’Antibes lives in the town near Nice on the Cote d’Azur has become a celebrity, appearing on television and in newspapers. He has his own website and has become a mascot for French coach Didier Deschamps and the players.  A retired orthopaedic nurse and a grandfather, he makes detailed plans for the World Cup years before the tournament. Planning enabled him to limit his accommodation costs to 360 euros for 34 days in Russia. Bunking with 15 other people, he paid just four euros (£3.5) a night for a Moscow youth hostel.Until now, his favourite host country had been South Korea, he said, praising the country’s hospitality. But the Russians have outdone the Koreans with their desire to help a 70-year-old who speaks barely a word of any language but French.”I think South Korea will slip to second and Russia go first,” he said. “It’s unbelievable. I ask something and people take me. The kindness of the people is incredible.”
Social media followers can track him around Russia. However, he has been forced to travel without his equally famous pet Balthazar, as airlines and hotels would not put up with a cockerel ,the symbol of French sporting pride.
When the next World Cup is held in Qatar, he would prefer to spend more time on his three grandchildren. “This will be my eighth and last World Cup,” he said. “So I hope for a beautiful last one. Voila. Then return to France.”