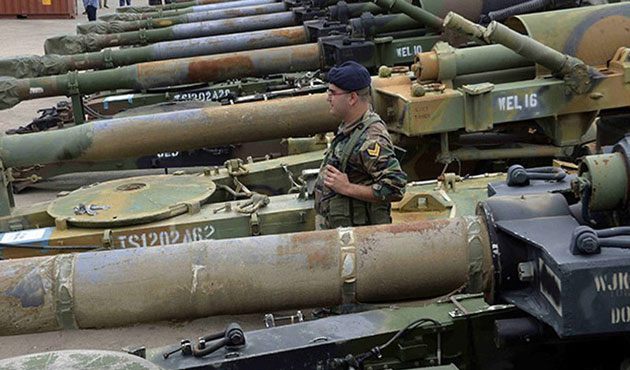 BEIRUT – The first shipment of French weapons and military equipment arrived in Lebanon on Monday under a Saudi-funded deal worth $3 billion to bolster the Lebanese army's fight against militants encroaching from neighbouring Syria. Lebanese news channels showed a military plane at Beirut International airport with green boxes of weapons and missiles laid out in front. French flags waved and the French and Lebanese ministers of defence attended the ceremony. Lebanon, whose sectarian divisions have been exacerbated by the war over the border in Syria, has said it needs more resources and better hardware. The deal will involve about 20 French companies and cover a mix of land, sea and air equipment, including armoured vehicles, heavy artillery, anti-tank missiles, mortars and assault weapons, a French defence ministry source has said. A security source from Lebanon, which is still rebuilding after its own 15-year civil war, said the first shipment was 48 "Milan" anti-tank missiles. Saudi Arabia sees itself as the defender of Sunni Islam in the region and wants to help beef up Lebanese security forces in the face of threats from both Sunni jihadis and Lebanon's powerful Shi'ite movement Hezbollah. The deal was signed in November in the Saudi capital Riyadh. Saudi Arabia has already provided $1 billion in military aid to the Lebanese army. –Reuters