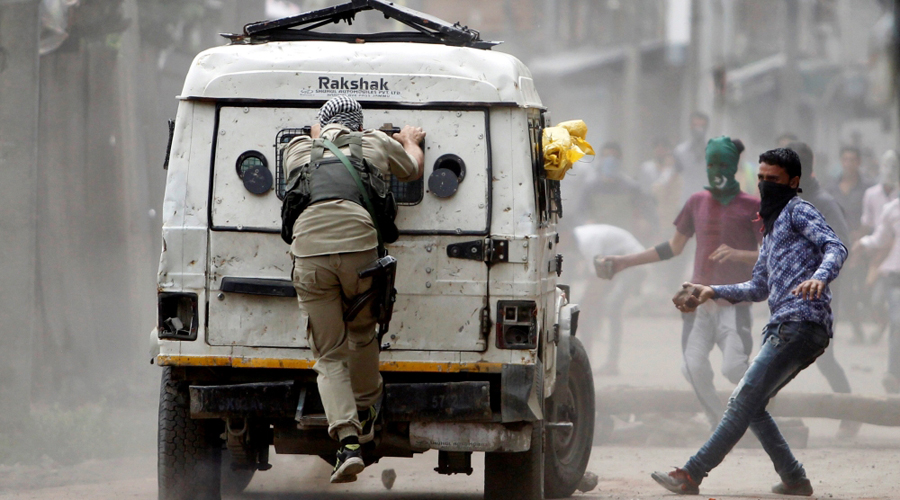 SRINAGAR (92 News) – Another protester has been killed and dozens of civilians were injured on Sunday during fresh clashes between Indian security forces and protesters in Kashmir’s Pulwama district as the region remains locked down for the 65th day. Thousands of residents of Karimabad and adjoining areas took to streets on Sunday morning to protest against the alleged nocturnal raids conducted by security forces. The protesters started pelting stones at the security forces who retaliated by firing tear smoke shells and pellet guns. As many as 20 injured persons have been referred to various hospitals in the city. The clashes were going on in the area till reports last came in. Curfew-like restrictions were in force in three police station areas of Srinagar on Sunday, while curbs on assembly of people continued throughout Kashmir as normal life remained affected for the 65th straight day in the unrest-hit Valley. Earlier, two protesters were killed and at least 100 others injured when anti-India demonstrators clashed with government forces in Indian-held Kashmir on Saturday. One young man was killed in southern Shopian district when his head was hit with a tear gas canister fired by police, while another protester died of pellet injuries as government forces fired pump action shotguns to break up a public rally against Indian rule attended by thousands in Botengoo village in southern Kashmir valley. Thousands of people in Indian-administered Kashmir have been protesting against Indian rule almost daily since the killing of a popular rebel leader in a gun battle with soldiers on July 8, staging "freedom rallies". With Saturday's killings, the death toll in the unrest, which has entered its third month, climbed to 90. The government has been coming under growing pressure over the use of pellet guns and the level of casualties in Kashmir during the anti-India protests. The metal pellets or birdshot fired from the pump-action shotguns rarely result in deaths, but can often blind victims if the fragments hit them in the eye. Indian authorities lifted curfew in most parts of the territory late last month, but schools, shops and many banks remain closed while residents struggle with a communications blackout.