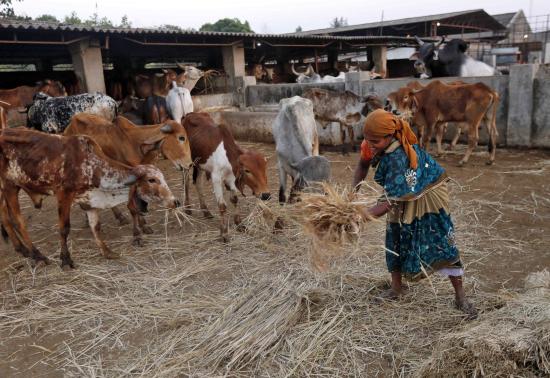 MUMBAI (Reuters) - Hindu nationalists in India have stepped up attacks on the country's beef industry, seizing trucks with cattle bound for abattoirs and blockading meat processing plants in a bid to halt the trade in the world's second-biggest exporter. The industry is predominantly run by Muslim traders and some groups in the majority Hindu population vehemently oppose it due to the revered status of cows. Beef traders fear that elements in the party of Prime Minister Narendra Modi may be condoning the latest flare-up in protests. There has been a surge of raids this month. An official at a beef transport group in Maharashtra state said around 10 vehicles travelling to Mumbai had been stopped, the animals taken forcefully and drivers beaten by members of Hindu nationalist groups despite carrying valid documents. "We are doing everything legally, but these people harass us and disrupt our work for no reason," said Mohammad Shahid Sheikh, president of the beef transporters' group in Deonar, the site of India's biggest abattoir on the outskirts of Mumbai. Despite the sensitivities over the trade, India has become the world's top beef exporter behind Brazil. Traders said the current attacks had not caused major disruption, but if they were to become nationwide could threaten the lucrative business. A majority of India's beef comes from buffaloes, which are not worshipped, but members of Hindu nationalist groups involved in protests such as Vishwa Hindu Parishad (VHP) consider themselves protectors of both cows and buffaloes. Some of these groups have close links with the Bharatiya Janata Party (BJP) of Prime Minister Modi, who himself criticised the previous government for promoting a "pink revolution to butcher cattle and export meat". The attacks on beef traders are another example of Modi's struggles to contain extremist elements of the BJP's support base, whose strident behaviour is dragging on the government's economic reform agenda. Modi last week vowed to protect all religious groups after attacks on Christian institutions in New Delhi, which were partly blamed for the BJP's drubbing in a state election. The BJP's national general secretary, Ram Madhav, declined to comment on the party's stance on the beef trade and the protests, while Modi's press officer did not respond to calls and a text message seeking comment. Satpal Malik, a vice president of the farmers wing of the BJP, said: "We did say we would discourage beef exports and even the prime minister was against it, but I can't comment on what we think of the issue now." CRACKDOWN? Officials in Maharashtra – scene of some of the most violent protests seen to date – have pledged to arrest anyone found impeding access to slaughterhouses or disrupting cattle movement. A circular had been sent to all the police units to enforce this and was due to be implemented immediately, said a senior police officer from Maharashtra, declining to be named. Mohammad Ali Qureshi, president of the Bombay Suburban Beef Dealers Association, said that while beef processing has resumed at many facilities, he would back calls for a nationwide protest if fresh trouble breaks out. "We will monitor the situation for a month and if the promises are not kept we will launch a nation-wide protest," he said, in between sipping tea as butchers went about their job in Deonar. But those opposed to the trade vowed to keep staging protests. Killing cows is legal in just two of India's 29 states, though reports of illegal slaughter surface regularly. "We don't care if the butchers shut shop or announce a strike," said Laxmi Narayan Chandak, head of the Maharashtra unit of VHP's cow protection committee, which says it has been seizing cows held illegally for slaughter for years. "The previous government supported the butchers to secure votes of the minority community but they have no support in the new government." India's beef shipments in the last year to October rose to 1.95 million tonnes, 5 percent more than for the whole of 2013, according to the US Department of Agriculture. A senior official at a leading Indian beef exporter said that exports had been rising because of robust demand from China and other big consumers. "But if supplies are disrupted for a longer period then definitely it would hit our productivity."