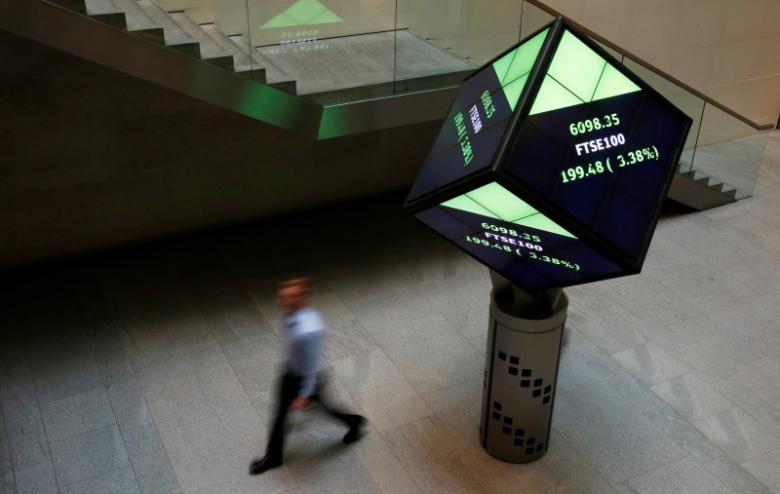 LONDON - UK shares fell on Friday, extending losses from the previous session after the European Central Bank made no changes to its asset-buying programme, although British banks rallied. The FTSE 100 index was down 0.1 percent at 6,850.48 points by 0858 GMT and on track to post a loss for the week. The ECB kept rates on hold and while maintaining the timetable for its quantitative easing programme, President Mario Draghi said that the possible extension of the programme had not been discussed, although bank committees had been ordered to consider options, sending European markets lower. Britain's banks rose, however, with Royal Bank of Scotland and Barclays up 3 percent and 1.7 percent respectively, with analysts saying that Draghi's lack of an indication for any further rate cuts had been taken as a positive by investors. "These lower interest rates are really damaging the banks," Jonathan Roy, advisory investment manager at Charles Hanover Investments, said. "Whereas there has been a continual cutting in rates over the last eighteen months, which has been really damaging for core banking profitability ratios, it signalled yesterday that there might be a plateau now in deterioration of those ratios which is being taken as a positive for the banks currently." Broker downgrades weighed on Bunzl, which dropped 3.1 percent after HSBC cut its rating on the stock to "hold", citing macro uncertainty, and Burberry, which fell 2 percent after Goldman Sachs removed the luxury goods stock from its Sustain Focus List. "Over the last two years (FY14-16), Burberry has seen weaker than expected financial performance," Goldman said in a note. "The key drivers of this deterioration have been subdued sales growth and increasing costs associated with the company’s strategic investments, including omni-channel. We are concerned that these headwinds continue." Outside of the blue chips, pub chain operator J.D. Wetherspoon rose 4.3 percent after reporting better-than-expected results. Peer Greene King, however, dropped 3.9 percent after reporting a slowdown in like-for-like sales growth and saying that trading could get tougher as a result of Brexit. -Reuters