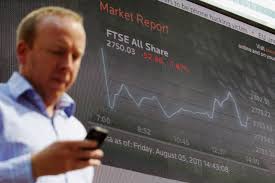 LONDON (Reuters) - UK shares plunged on Thursday, with domestically-focused stocks poised for their worst day since June 2016 when Britain voted to leave the European Union, as investors grew more nervous ahead of a crucial government vote on Brexit next week. Broad-based selling swept European bourses after the arrest of a top Huawei executive renewed worries about US-China trade tensions. The midcap FTSE 250 .FTMC was down 2.6 percent at its weakest since Dec. 22, 2016 at 1048 GMT and set for its worst day since June 2016 as investors bailed out of the domestically focussed stocks amid growing worries over Brexit. Prime Minister Theresa May is battling to get her Brexit deal through parliament in a vote scheduled for Tuesday, but the treaty faces heavy opposition from MPs both for and against Britain leaving the bloc. A survey released on Thursday showed institutional investors have grown more cautious about the outlook for British assets ahead of the vote. The FTSE 100 .FTSE was also down 2.6 percent after hitting its lowest since December 5, 2016, and was set for its biggest one-day fall since February. The blue-chip index was underperforming its European peers due to its exposure to heavyweight oil and mining stocks. Weak US equity futures accelerated the selling midmorning. Oil .FTNMX0530 and mining .FTNMX1770 stocks were down more than 4 percent, the biggest drag on the blue-chip index as crude and metal prices sank. “Investors are in the mood to accentuate all the negative news at the moment,” said Ian Williams, analyst at Peel Hunt. “Monday’s UK PMI reading showed that Brexit is affecting business decisions, the French are rioting on the streets, Italy’s not coming clean on its budget. First, we need clarity on all that, but it won’t happen before Christmas.” Crude futures fell more than 2 percent as a deal among OPEC members to cut output at their producer group’s meeting later in the day appeared unlikely. Copper fell for a fourth day after the chief financial officer of Chinese technology giant Huawei was arrested in relation to alleged violations of U.S. sanctions. [MET/L] Investors were fretting that the arrest could drive a wedge between the United States and China just days after Presidents Donald Trump and Xi Jinping agreed to a temporary truce in their trade war to give the two sides more time for negotiations. “Was the slightly euphoric reaction on Monday overdone? With hindsight, it appears it was,” said Williams. Among other decliners, bookies stocks were hit by a report that gambling companies have agreed to stop advertising during live sport broadcasts, such as football matches, amid growing pressure from politicians. GVC Holdings (GVC.L) dropped 4 percent, and Paddy Power Betfair slumped 3.1 percent. On the midcap index, Indivior (INDV.L) topped the fallers, down 11.8 percent, as investors moved out of the drugmaker ahead of its demotion to the small cap index later this month. The stock has also been hit hard by a U.S. court ruling late last month that allowed a rival to sell a copycat version of its blockbuster Suboxone drug. The buying that sent Thomas Cook Group (TCG.L) shares up 45 percent on Wednesday ran out of steam as worries about the travel operator’s almost 400 million pounds of debts following its profit warning returned. Shares were down 11.5 percent. Elsewhere, broker recommendations were the main drivers. Genus (GNS.L) rallied to its highest in more than two months after Kepler Cheuvreux upgraded the stock to buy, while Dialight (DIAL.L) dropped 8 percent to the bottom of the small-cap index after Peel Hunt cut its price target.