KARACHI (92 News) – Another victim of alleged food poisoning passed away on Saturday morning after five children from the same family died earlier on Friday. A paternal aunt to the five children who died a day before, Beena Badruddin, 28, passed away after she remained admitted in the ICU for a day. However, police has constituted a team to investigate deaths of children and their aunt who died after allegedly dining in at a local restaurant in Karachi’s Sadar area on the night of Feb 21. 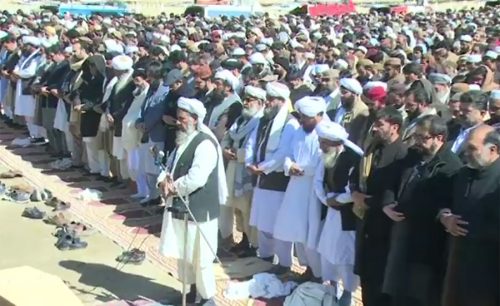 The funeral prayers for five children who died of food poisoning were offered in Khanozi area of Quetta. Thousands of people including government representatives and political leaders attended the funeral. Children will be buried in the local Khanoi cemetery. Five children were died and their mother was in critical condition due to the food poisoning in Karachi. Following the incident, the Sindh Food Authority submitted a report on the matter to the chief minister. Several cabinet members and lawmakers reached the hospital to condole the bereaved parents. In an initial report, the Sindh Food Authority (SFA) had informed the Sindh chief minister on Friday that food samples collected from the Naubahar Restaurant – from where the victims’ father bought food – and Qasar-e-Naz – where the family was staying –, had been sent to a lab for testing. The victims’ father, Faisal Zaman had come to Karachi from Quetta with his wife Nida Faisal and their five children, including Abdul Ali, Aziz Faisal, Alina, Tauheed and Salwa. Faisal’s sister Beena also accompanied them. Yesterday, the police informed that five children have died from food poisoning at a private hospital. Mother of the children is being treated at the hospital in a critical condition, the police said, without providing further details. The family was from Balochistan’s Pishin and victims’ family including women were told to be wife of PWD XEN. They arrived in Karachi at around 11pm. The family ordered Baryani from ‘Nobahar Hotel’ and they were deteriorating condition after eating Baryani. Later, five children died and mother’s condition critical. Meanwhile, Sindh Chief Minister Murad Ali Shah took the notice of the tragic incident and sought a report from the Food Authority Department. On the way, they ate food at a street-side restaurant in Khuzdar and when they got to Karachi they ordered biryani from a restaurant in Saddar. The police said they ate at the Naubahar restaurant in Saddar. The children have been identified as one-and-a-half-year-old Abdul Ali, four-year-old Aziz Faisal, six-year-old Aliya, seven-year-old Tauheed and nine-year-old Salwa. The sixth victim was their mother. They were staying at a Qasr-e-Naz (government lodges) in Karachi. The father, identified as PWD XEN, took his wife and sister to the Aga Khan University Hospital when they began feeling sick at around 3am. When he came back to their lodgings, he found his children were all dead