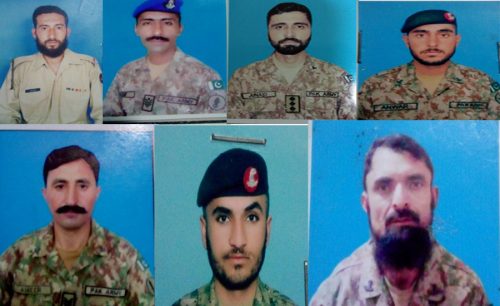 The army's media wing said, after the funeral prayers, the bodies were sent to respective native towns for burial ceremony with full military honour. A day earlier, Seven soldiers, including an officer, were martyred while nine terrorists killed in an intelligence-based operation in North Waziristan Agency. Under the Operation Raddul Fasaad, security forces launched an IBO in Gharlamai and Spera Kunar Algad in North Waziristan after a group of terrorists was reported to be have infiltrated from across and hiding in a compound. During the operation, nine terrorists were killed and their bodies held. In an intense exchange of fire, seven Pakistan Army soldiers, including an officer, embraced martyrdom. The martyred soldiers include Capt Junaid, Hav AMIR, Hav Atif, Hav Nasir, Hav Abdul Razzaq, Sep Sammi and Sep Anwar. The ISPR said that the area had been cleared and identification of killed terrorists was underway.