RAWALPINDI (92 News) – The funeral prayers of martyred Captain Umair Abbasi and three soldiers who lost their lives in Shawal were offered in Peshawar on Sunday. In a statement issued by the ISPR, Chief of Army Staff General Raheel Sharif, relatives of the martyred army personnel and other high level military and civil officials attended the funeral prayers of Captain Umair and three soldiers Hakeem Ali, Rashid and Hameed, and prayed for the departed souls. The funeral prayers were offered at corps headquarters. COAS Gen Raheel Sharif expressed solidarity with the bereaved families and later visited the injured soldiers at CMH Peshawar. Gen Raheel Sharif said that they are committed to root out terrorism from the country, adding that the terrorists will not be given chance to flee from Shawal. He further visited Combined Military Hospital in Peshawar and inquired about health of the personnel who were injured in the operation. Later, COAS Gen Raheel Sharif also visited the Corps HQ where he was briefed by Corps Commander Lieutenant General Hidayat-ur-Rehman about latest progress of operation in Shawal. COAS expressed complete satisfaction over final push in North Wazirastan to evict terrorists from isolated pockets of Shawal close to Pak-Afghan border. 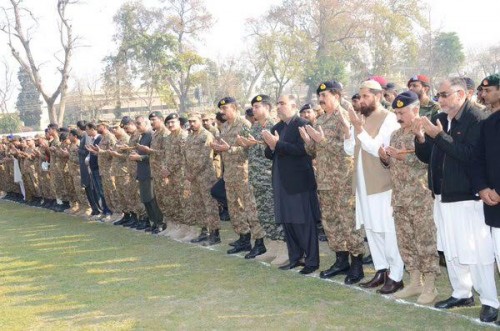