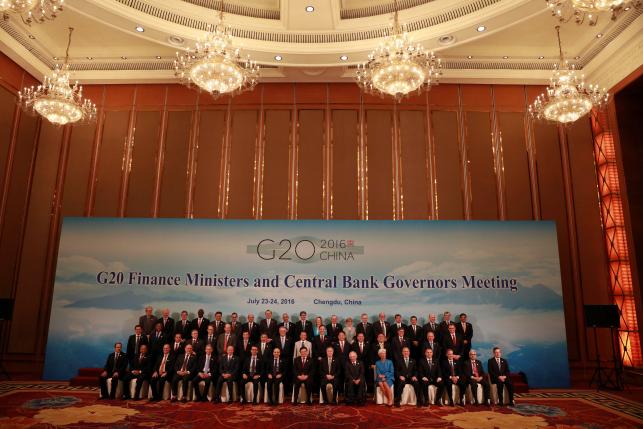 CHENGDU - The world's biggest economies will work to support global growth and better share the benefits of trade, policymakers said on Sunday after a meeting dominated by the impact of Britain's exit from Europe and fears of rising protectionism. Philip Hammond, Britain's new finance minister, said the uncertainty about Brexit would begin to abate once Britain laid out a vision for a future relationship with Europe, which could become clearer later this year. But there could be volatility in financial markets throughout the negotiations in the years ahead, Hammond said after the meeting of finance ministers and central bankers from the Group of 20 (G20) major economies in China's southwestern city of Chengdu. "What will start to reduce uncertainty is when we are able to set out more clearly the kind of arrangement we envisage going forward with the European Union," Hammond told reporters. "If our European Union partners respond to such a vision positively - obviously it will be subject to negotiation - so that there is a sense perhaps later this year that we are all on the same page in terms of where we expect to be going. I think that will send a reassuring signal to the business community and to markets." A communique issued by the G20 ministers at the end of the two-day meeting said Brexit, which dominated discussions, had added to uncertainty in the global economy where growth was "weaker than desirable". It added that members, however, were "well positioned to proactively address the potential economic and financial consequences". "We are taking actions to foster confidence and support growth," the communique said. "In light of recent developments, we reiterate our determination to use all policy tools – monetary, fiscal and structural – individually and collectively to achieve our goal of strong, sustainable, balanced and inclusive growth." The International Monetary Fund this week cut its global growth forecasts because of the Brexit vote. NEED TO LIFT GROWTH Whereas monetary policy figured prominently in previous meetings of G20 financial officials, Bank of France Governor Francois Villeroy de Galhau said there was very little debate this time and discussions focused instead on growth. That was echoed by others. There was broad consensus that the global economy needed more growth, U.S. Treasury Secretary Jack Lew told reporters, while Chinese Finance Minister Lou Jiwei said it had been easier to forge consensus because the global recovery remained weak. The specter of protectionism, highlighted not only by Brexit but also by U.S. Republican presidential candidate Donald Trump's "America First" rhetoric and talk of pulling out of trade agreements, was also a focus for the policymakers. "Not only Brexit but various risks of low growth remain, and there was a lot of debate on the need of monitoring developments including terrorism, geopolitical risks and refugees," said a Japanese finance ministry official. "A lot of concerns were voiced over spreading measures for protectionism." In the communique, the G20 underscored "the role of open trade policies and a strong and secure global trading system in promoting inclusive global economic growth, and we will make further efforts to revitalize global trade and lift investment". But the group also conceded that "the benefits of growth need to be shared more broadly within and among countries to promote inclusiveness". It recognized problems wrought by industrial overcapacity, particularly the steel sector, which had a negative impact on trade and workers. Overcapacity was a "global issue which requires collective responses". "We also recognize that subsidies and other types of support from governments or government-sponsored institutions can cause market distortions and contribute to global excess capacity and therefore require attention," the communique said. Persistent concerns about the potential for competitive currency devaluations were discussed, and the agreement to refrain from them was again in the communique, but they did not appear to figure as prominently as in the ministers' February meeting in Shanghai. -Reuters