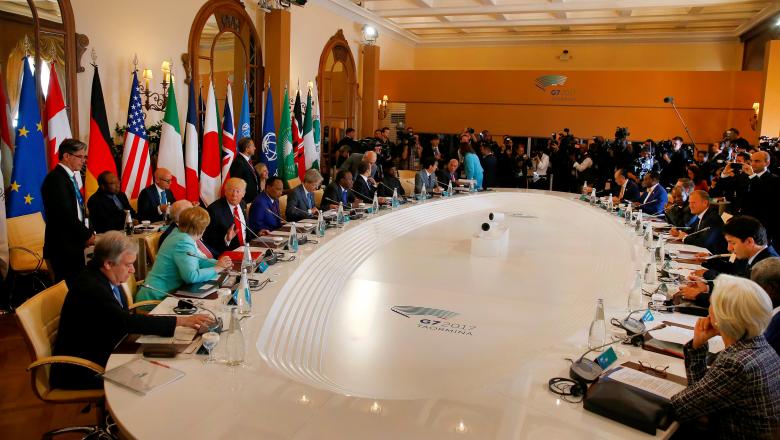 TAORMINA, Italy –Leaders of the Group of Seven wealthy nations met African heads of state on Saturday, the final day of their annual summit which has been marked by discord over climate change, but unity on tackling terrorism.

Italy had hoped to make Africa the major focus of the annual G7 gathering, holding the discussions on the island of Sicily that has taken in hundreds of thousands of migrants over the past four years as they flee war and poverty back home.

However, the two-day meeting got overshadowed by a suicide bombing in northern England on Monday that killed 22 people, and also got bogged down by lengthy discussions on the merit of free trade and the 2015 Paris Agreement to tackle climate change.

U.S. President Donald Trump has yet to decide whether to honor a U.S. commitment to greenhouse gas emissions and has pushed back against a lattice of international trade accords that he says have hurt American economic interests.

"We are having to talk about things settled years ago," said a top level member of one G7 delegation, frustrated by the U.S. position.

Diplomats from Britain, Canada, France, Germany, Italy, Japan and the United States worked late into the night to agree on the final communique, which was expected to be little more than six pages long, against 32 pages last year.

A French presidential source said substantial progress had been made on the question of trade, particularly in the area of multilateralism, suggesting Trump may have bowed to pressure for a more collaborative approach to international commerce.

Italy had hoped to emphasize the positive impact migration can have and to call on industrialized nations to open up more legal channels for immigration to try to slow the flow of people risking their lives to reach Europe on flimsy boats from Libya.

That idea was shot down ahead of the meeting.

"There was very strong opposition by the Americans and British who wanted to refocus on security and water down the expansive language on freedom of movement," said a European diplomat, who declined to be named.

The leaders of Tunisia, Kenya, Ethiopia, Niger and Nigeria's acting president joined the talks on Saturday morning, along with the heads of the African Union, the United Nations, the International Monetary Fund and the World Bank.

"Perhaps the choice (to be in) Taormina and Sicily says much about how important our relations are with Africa," Italian Prime Minister Paolo Gentiloni said in opening remarks.

"Today our discussion on Africa will focus on the need for a partnership across all sectors ... with innovation and development our core objective," he said, speaking in Italian.

Unlike other leaders, Trump, who was sitting between the heads of state of Tunisia and Niger, did not put on headphones to listen to a simultaneous translation.

The U.S. president will return to Washington later on Saturday at the end of a nine-day tour of the Middle East and Europe -- his first foreign trip since taking office.

Unlike other G7 leaders, he is not due to give a closing press conference before flying out.

U.S. officials said he had enjoyed "robust" conversations with his allies in Sicily and had also learnt a lot -- especially in the debate on climate change, which he has previously dismissed as a hoax.

"He came here to learn. He came here to get smart. His views are evolving which exactly as they should be," Trump's economic adviser Gary Cohn said on Friday. –Reuters