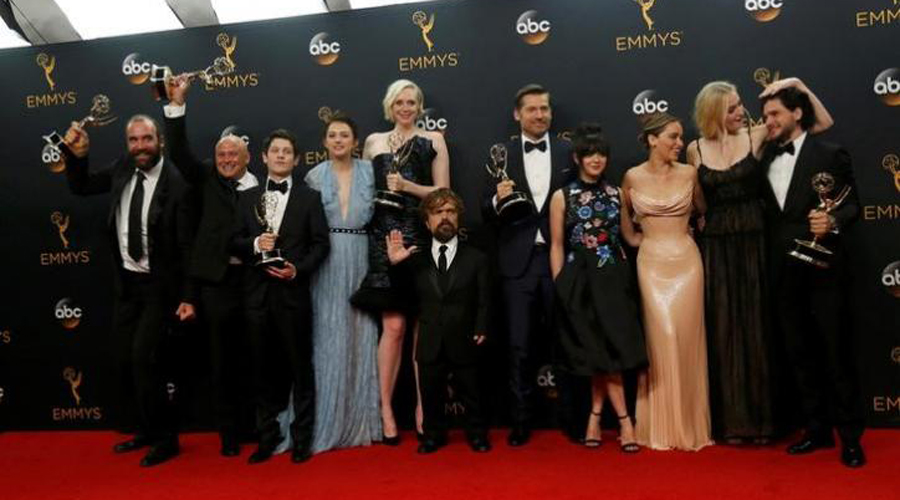 LOS ANGELES - Fantasy drama series "Game of Thrones" and comedy "Veep" proved repeat winners for cable giant HBO at the Emmy awards, but newcomers and actors of color also made their mark in a ceremony where election-year politics played large. Fan favorite "Game of Thrones," went into Sunday's show with a leading 23 nominations and won a total of 12 Emmys, including for best drama series, directing and writing. It beat off a challenge from USA network's "Mr. Robot," as well as Netflix's dark Washington D.C. drama "House of Cards." "We're standing up here because George Martin created the world that we all live and play in," said co-creator Dan Weiss. True crime was also a big winner. "The People v. O.J. Simpson," FX's 10-hour dramatization of the former football player's 1995 double murder trial and sensational acquittal won nine Emmys, including for best limited series and for actors Sarah Paulson, Courtney B. Vance and Sterling K. Brown. Paulson, who played losing Los Angeles trial prosecutor Marcia Clark in the show, brought Clark along with her to the Emmys. "The more I learned about the real Marcia Clark... the more I had to recognize that I along with the rest of the world had been superficial and careless in my judgment," said Paulson, accepting her first Emmy. Host Jimmy Kimmel opened Sunday's show with a string of jokes about Republican presidential contender and former "Celebrity Apprentice" star Donald Trump. "If Donald Trump gets elected and he builds that wall, the first person we are throwing over it is Mark Burnett," quipped Kimmel, addressing Burnett, the British producer who created "Celebrity Apprentice." "Veep" star Julia Louis-Dreyfus won her fifth straight Emmy for her role in the satirical White House comedy in which she plays a graspingly ambitious and inept president battling to stay in power. Louis-Dreyfus apologized for what she called "the current political climate," seven weeks before the presidential election. "I think that 'Veep' has torn down the wall between comedy and politics. Our show started out as a political satire but it now feels like a sobering documentary," she quipped, in an oblique reference to the presidential campaign. DIVERSITY RULES Sunday's Emmys were notable for having a record 21 nominees of color, in contrast to this year's all-white Oscars acting lineup. Several took home Emmys, many for the first time. Along "O.J. Simpson" winners Brown and Vance, Egyptian-American Rami Malek beat veterans Kevin Spacey and Liev Schreiber to scoop his first Emmy for playing a socially inept computer hacker in "Mr. Robot." "Oh my god. Please tell me you are seeing this too," said a stunned Malek, 35. Indian-American Aziz Ansari shared a writing Emmy with Asian-American Alan Yang for their comedy series "Master of None," while black actress Regina King won for her role in "American Crime" and African-American comedians Keegan-Michael Key and Jordan Peele were honored for their sketch series "Key & Peele." Other Emmy newcomers included Canadian Tatiana Maslany, a surprise best drama actress winner who beat out presumed front runner Robin Wright for playing a woman with multiple cloned personalities in "Orphan Black." Elsewhere, Jeffrey Tambor won best comedy actor for a second time for his role as a father who transitions to a woman in Amazon's ground-breaking "Transparent." "Saturday Night Live" comedian Kate McKinnon, who plays Democratic US presidential nominee Hillary Clinton, won supporting comedy actress, and John Oliver's biting "Last Week Tonight with John Oliver" won the Emmy for variety talk series. -Reuters