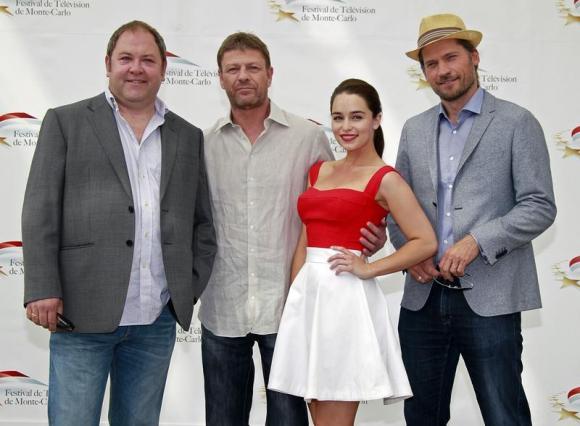 LONDON - Medieval fantasy "Game of Thrones" met some medieval reality on Wednesday at the Tower of London where stars from the hit HBO television show walked a red carpeted moat for the premiere of the fifth season. The buzz around the 11th century building, one of the oldest in London, centered on how far season five would stray from the books of George R.R. Martin after the author suggested it might not be as faithful as in seasons past. "Like every season there are a lot of shocks but there will probably be even more, particularly for the book readers," said Michael McElhatton, who plays Roose Bolton in the cut-throat, blood-soaked drama about warring kingdoms. Stars like Kit Harington and Nikolaj Coster-Waldau took pains not to ruin any surprises for fans, who take to the Internet and social media to theorize about twists and turns. Iwan Rheon who plays the psychopathic Ramsay Snow, did allow that religion and spirituality bring a new dynamic to the show. "It's really scary and quite sinister and everything gets closer to boiling point as well. The pressure cooker is being turned up and it's getting full on," he said. Some of the most popular cast members, Lena Headey, Peter Dinklage, Emilia Clarke and Maisie Williams, were no-shows. But the ravens who feature prominently in the show were there. Actually, they live there, at the Tower of London. Season five debuts on Time Warner Inc's HBO on April 12, while in Britain, Sky Atlantic will show the first episode one day later. - Reuters