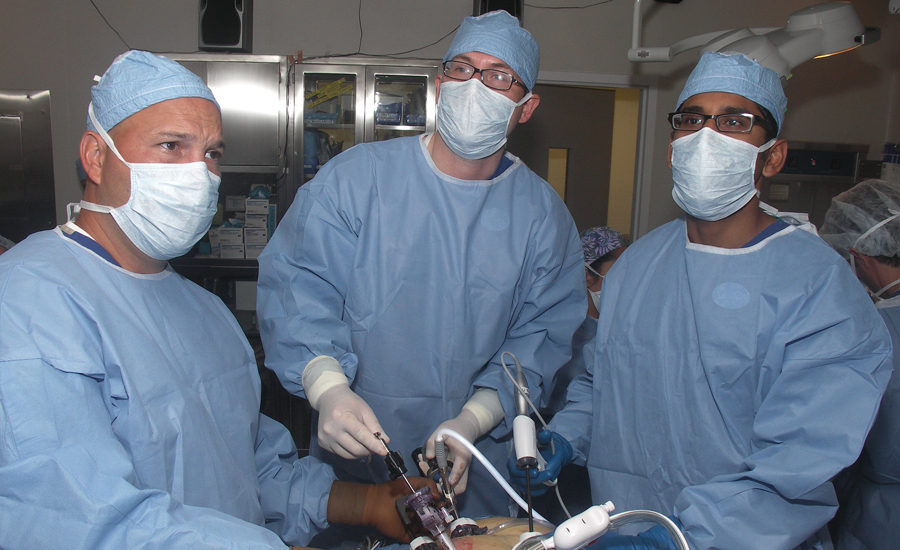 MICHIGAN – People who undergo surgery to have gastric bands placed around their stomach in hopes of slimming down often need additional operations to move or remove the device, according to a new study.

About one in five people required additional surgeries within about five years of receiving a gastric band, researchers found.

"Bands have really gone out of style," said senior author Dr. Justin Dimick, of the University of Michigan in Ann Arbor. "If you're offered one, you should think twice about it, because most surgeons have stopped using them."

Instead of gastric banding, an operation called a gastric bypass is considered the gold standard for weight-loss surgery by the American Society for Metabolic and Bariatric Surgery and the National Institutes of Health.

Gastric bands were approved by the U.S. Food and Drug Administration in 2001, Dimick and colleagues note in JAMA Surgery. A band is placed around the upper part of the stomach to decrease its size, leaving less room for food. The band's tightness can be adjusted.

Complications from the gastric band can sometimes require additional operations, however. For example, the band can erode into the stomach or slip down and cause an obstruction.

Estimates of the proportion of patients who undergo additional operations after receiving a gastric band vary widely, they add, from as few as 4 percent to as many as 60 percent.

To get a better picture of the gastric-band reoperation rate in the United States, the researchers analyzed data from Medicare, the publicly-funded health insurance program for the elderly and disabled.

Overall, 18.5 percent of patients needed at least one more surgery to fix, move or remove their gastric band.

In total, 4,636 patients needed another 17,539 surgeries for their device - an average of nearly four more surgeries per patient.

By 2010, with surgeons having moved away from using gastric bands, Medicare was spending more money on reoperations than on initial operations to implant the devices, the researchers found.

"Right now, more bands are going out than going in," said Dimick.

Other options for weight loss surgery include gastric sleeve and gastric bypass. Both procedures work by surgically creating a smaller stomach, but gastric bypass also creates a shorter small intestine that may reduce the absorption of calories and nutrients. The rerouting of food with a gastric bypass operation leads to changes in hormones that help to reduce hunger, create a feeling of fullness and reduce the risk for type 2 diabetes.

The initial cost of gastric bypass is typically more than the band or gastric sleeve procedures due to its more invasive nature.

"A committed surgeon and program, and the ideal patient with a similar level of commitment, are needed to achieve these best outcomes," wrote Gould, of the Medical College of Wisconsin in Milwaukee.

"No single bariatric procedure is appropriate for all patients," he added.

Dimick disagreed and said keeping the band available for a few patients may lead many others to get the device when they would have benefited from a different procedure.

Also, he pointed out, performing a gastric bypass in a patient who previously had a gastric band or sleeve may increase the risk of complications, because the patient will have scar tissue from the earlier surgery.

"I think the most interesting thing about this is that surgeons have already voted with their feet by stop doing it in their practices," he said. –Reuters