Gaultier lights up fashion week with provocative ode to smoking 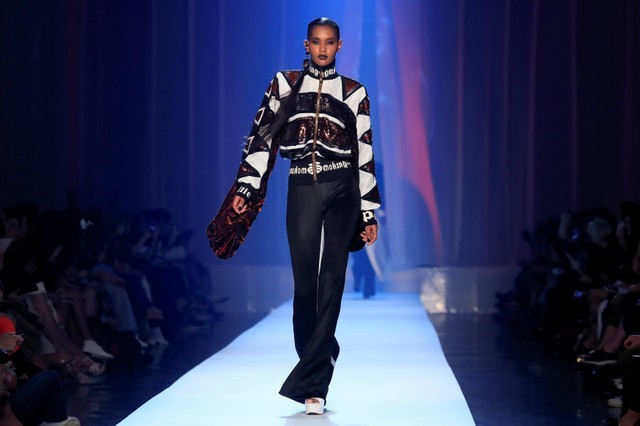 Gaultier lights up fashion week with provocative ode to smoking

PARIS (Reuters) - With sultry tuxedos and a gown that appeared to waft down the catwalk like cigarette smoke, French designer Jean Paul Gaultier celebrated smoking in all its forms on Wednesday in a fashion show filled with tongue-in-cheek digs at overly rigid attitudes.
Reinterpretations of “Le Smoking” - or tuxedos for women popularised by late French couturier Yves Saint Laurent in the 1960s - dominated the Haute Couture collection, with black and white combinations of jackets and ruffled dresses for instance. The designer took smoke as his inspiration for a see-through dress decked out in swirling embellishments, or a wedding gown with a featherlight, waspy train that looked like it could vanish into thin air as it twirled on the runway. Gaultier, the self-style “enfant terrible” of the fashion world, was also deliberately harking back to a period when smoking was more widely acceptable. “I don’t smoke, but I was always surrounded by people that were smoking,” Gaultier said after the show in Paris. “I don’t say ‘don’t smoke or smoke’, it’s only that people should do what they want.” Smoking was banned in public places in France in 2006, echoing clampdowns in many other countries by authorities for health reasons. The collection also featured a pair of male and female models walking in step and showcasing their breasts behind transparent panels with the slogan “Free the nipple”. Gaultier said that felt that society had taken some steps backwards following the “free-all” protest movements of feminists in the 1960s and 1970s. “Now there is again a kind of puritanism that arrived. Me, I am for the bra, but ... to oblige people to wear a bra, no, I’m not for that at all,” added the designer, famous for creating a stage costume for singer Madonna featuring a conical bra. Gaultier’s couture brand is owned by private Spanish fashion and fragrance group Puig. Paris Haute Couture Week - where a select club of fashion houses present their one-of-a-kind creations and showcase some of their most elaborate styles - runs until July 5. On Thursday top jewellery brands are presenting their collections.