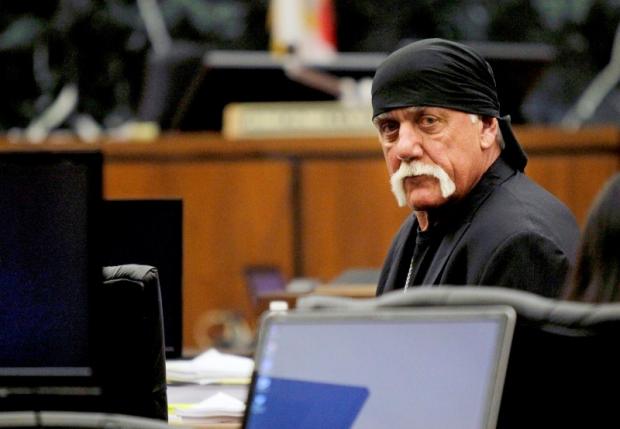 ST. PETERSBURG, FLA. – A Florida jury awarded punitive damages totaling $25 million on Monday in a second blow to Gawker, coming on top of the $115 million the online news outlet must pay for posting a sex tape of the former professional wrestler Hulk Hogan. The six-person jury assessed Gawker $15 million in punitive damages. The media company's publisher and CEO, Nick Denton, was slapped with an additional $10 million. "I think we made history today, because I think we protected a lot of people today who may be going through what I went through," Hogan told reporters Monday. Juror Salina Stevens, 35, said watching the video strengthened her resolve to find in favor of protecting Hogan's privacy. Stevens said she believes in First Amendment rights, but "we also have privacy laws, and I hope those will be taken into more consideration." Hogan sued the website for posting a video clip in 2012 featuring him having sex with the wife of his then-best friend, the radio shock jock Bubba the Love Sponge Clem. Hogan, 62, testified that he did not know that their consensual tryst was being recorded when it occurred nearly a decade ago inside Clem's home. The editor responsible for the post, A.J. Daulerio, was assessed $100,000 in punitive damages. On Friday, after a two-week trial in St. Petersburg, near Hogan's home, the jury awarded the longtime World Wrestling Entertainment star $60 million for emotional distress and $55 million for economic damages. Gawker plans to appeal the decision in a civil case that has drawn wide interest for testing boundaries between a celebrity's privacy rights and press liberties in the digital age. Legal experts say the company stands a good chance of getting the decision pared back or reversed on appeal. "We are confident we will win this case ultimately based on not only on the law but also on the truth," Gawker said in a statement. An attorney for Hogan, whose legal name is Terry Bollea, argued on Monday that the jury could deter Gawker and other sites with a significant award of punitive damages. Gawker attorney Michael Berry argued that punitive damages would be piling on to a verdict that already "could be debilitating for Gawker Media." The jury was told that Gawker Media is worth $83 million. Denton is worth about $121 million, most of which came from his share of a separate parent company that owns Gawker and holds its intellectual property, valued at $276 million. Daulerio had no assets and thousands of dollars in student loans, the attorneys said. –Reuters