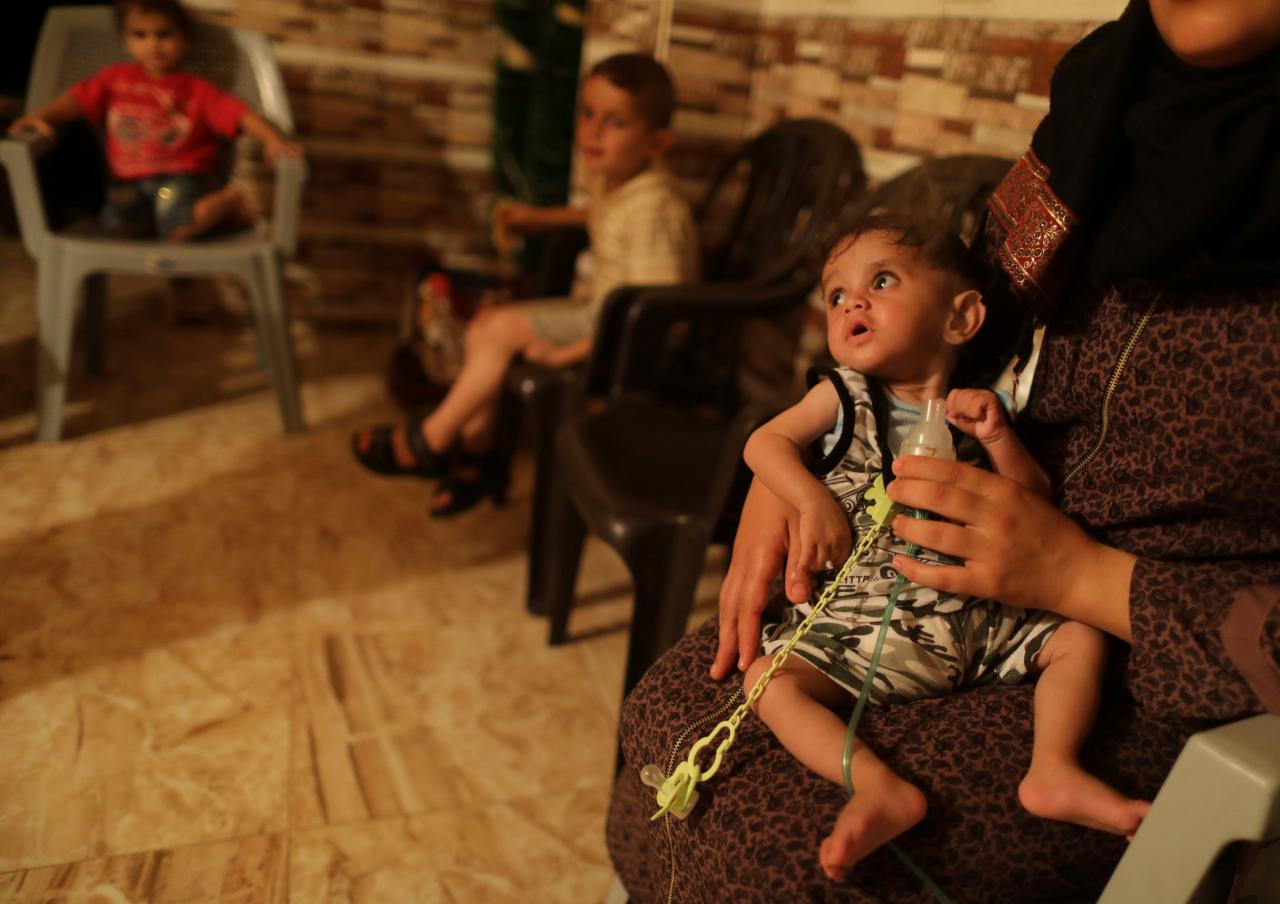 GAZA (Reuters) - Ritta al-Jalees doesn't care who's to blame for the deteriorating state of healthcare in Gaza. All she wants is to ensure her three sons get the help they need to breathe.

The boys, aged nine months and six and seven years, all of whom suffer from cystic fibrosis, are getting weaker because Gaza is running out of the drugs needed to treat the inherited lung disease and because of cuts to power for oxygen pumps and ventilators.

"I blame all sides," said Jalees, a mother of six, as she held her youngest at Al-Rantissi Hospital for Children in Gaza City. "Are these children at fault?"

Gaza has been under an Israeli blockade since 2007 after Hamas forces seized control of the territory following a brief civil war with security forces loyal to Mahmoud Abbas, the Western-backed Palestinian president based in the West Bank. Egypt, at odds with Hamas, also maintains a blockade.

Although the Israeli blockage has eased somewhat in recent years, a new stage in the struggle between Abbas and the Islamist Hamas is turning the screws on the enclave afresh.

In what is seen as the latest step in an effort to force Hamas to relinquish its control of Gaza, Abbas in June reduced the payments the PA makes to Israel for electricity it supplies to the territory.

The resulting cuts mean that Gaza's two million people now have only 3 to 4 hours of power a day, forcing hospitals and other medical facilities to rely chiefly on generators and expensive fuel, while many private homes just go without.

Hamas says that Abbas restricted transfers of medicine to Gaza in March, accusing Hamas of failing to reimburse the PA for its purchases, and cut the salaries of its officials in May.

"We believe the actions of the Palestinian Authority and the Israeli occupation together are undermining the entire health service system in Gaza," Qidra told Reuters.

Hamas also accuses the PA of delaying the transfer of hundreds of seriously ill patients to Israel or the Israeli-occupied West Bank, actions which it says has resulted in 13 deaths since April.

Whoever is at fault, a U.N. report released last week said power shortages are deepening a humanitarian crisis, with hospitals in a precarious condition, water shortages increasing and raw sewage being dumped into the Mediterranean because treatment plants aren't functioning.

"The two million residents of Gaza are suffering through a humanitarian crisis that is entirely human-made," the report said. "It represents a complete failure of all parties to uphold their fundamental human rights obligations, including the inalienable right to life."

Omar Al-Naser, director of media and public relations at the West Bank-based ministry of health, said Hamas' complaints were politically motivated. Hospitals in the West Bank were also suffering from drug shortages, he said.

"Shortages in Gaza may happen, just like there are shortages in the north counties (West Bank), because there are debts the health ministry is trying to pay," he added.

The Israeli government body that supervises civil activities in the Palestinian territories, the Coordination and Liaison Administration (CLA), said any holdup in patient transfers from Gaza was an internal Palestinian affair.

"We would like to emphasise that in cases in which the Palestinian Authority sends requests, especially those defined as urgent, the Gaza CLA coordinates the crossing of patients immediately during every hour of the day in order to save lives," it said in a written response to Reuters.

It said nearly 16,000 patients and escorts have been allowed to leave for hospitals in Israel and the West Bank so far in 2017, including 6,400 in the past three months.

It also said it reduced power supplies to Gaza on a request from the Palestinian Authority.

Cystic fibrosis causes the lungs and digestive system to become clogged with thick, sticky mucus. Over many years, the lungs and pancreas may eventually stop functioning.

Gaza health officials say 320 people in the enclave have the disorder. Although it can be managed for years with regular visits to hospital, some sufferers in Gaza are now being admitted to hospital because of their worsening condition and because drugs there are cheaper and in some cases, free.

Police officer Ashraf Shanty and his wife Jihan, who have two children with cystic fibrosis, started a charity in 2008 to help patients get medication and medical checks.

Dozens of bags of medicines sit on a table next to breathing equipment in a room that Jihan Shanty, a medical laboratory technician, has turned into a mini-clinic in their home.

One of the medicines in short supply is Creon. Made by the U.S. drugmaker AbbVie, it is used to treat a common condition in cystic fibrosis in which the sticky mucus prevents enzymes getting from the pancreas to the small intestine, where they would normally help break down food.

"I have two sons suffering from the disease but I see myself as the father of 320 cystic fibrosis patients, whom I must help," Ashraf Shanty said.

"Without Creon, the enzyme of life, they may die," he said.