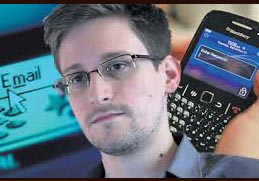 LONDON (92 News) – Former Central Intelligence Agency’s (CIA) officer Edward Snowden on Tuesday revealed that the British secret department of Government Communications Headquarters (GCHQ) has been monitoring Pakistan’s Smartphone’s and internet users. Snowden said that the UK government acquired vast amounts of communications data from inside Pakistan by secretly hacking into routers manufactured by the US company, Cisco, adding that CNE is basically a digital spying. Describing the relationship between GCHQ and its US counterpart, former CIA officer said that: "GCHQ is to all intents and purposes a subsidiary of the NSA. "They [the NSA] provide technology, they provide tasking and direction as to what they [GCHQ] should go after." Mr Snowden said the agencies were targeting those suspected of involvement in terrorism or other serious crimes such as paedophilia "but to find out who those targets are they've got to collect mass data". "They say, and in many cases this is true, that they're not going to read your email, for example, but they can and if they did you would never know," he said.