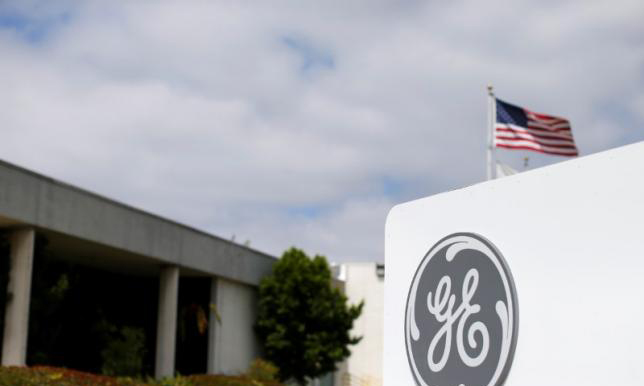 NEW YORK- General Electric Co (GE.N) scaled back expectations for its full-year revenue and profit on Friday, overshadowing third-quarter profit that beat analyst forecasts and sending its shares lower.
Weak global economies and low oil prices hit the industrial giant's sales of oil and gas infrastructure equipment especially hard. This limited GE's organic revenue growth, which excludes acquisitions, to just 1 percent in the quarter. The company's shares were down 0.9 percent at $28.81 in afternoon trading on the New York Stock Exchange. Earlier the stock fell 2 percent, the biggest decliner in the Dow Jones Industrial Average index. On the plus side, GE's adjusted quarterly profit jumped 10 percent to 32 cents a share, exceeding the 30 cents that analysts had estimated on average, according to Thomson Reuters I/B/E/S. Analysts said the beat was not a complete surprise since they had recently trimmed estimates by two or three cents. GE also raised its full-year target for cash returned to shareholders to $30 billion from $26 billion and noted it had returned $25 billion in the first three quarters. The company lifted its cash flow outlook to at least $32 billion, up from a range of $29 billion to $32 billion it forecast at the end of the second quarter. FORECASTS ADJUSTED But GE trimmed its full-year revenue forecast to flat to 2 percent growth, down from 2 percent to 4 percent growth. It also narrowed its adjusted profit forecast to between $1.48 and $1.52 a share, compared with the $1.45 to $1.55 a share forecast at the end of the second quarter. GE's weak revenue largely reflected the continuing reluctance of oil and gas companies to make new long-term investments, despite signs that the market is picking up, GE officials said. GE's oil and gas segment revenue slumped 25 percent in the quarter, disappointing analysts, who had been hoping GE would report stronger revenue growth after a weak first half. Three big international oil and gas deals that GE had expected to close in the second half have been delayed or suspended, so GE cut them from its projections for the year, Chief Financial Officer Jeff Bornstein told Reuters. Bornstein said he thought the oil and gas market had bottomed during the summer and there were clear signs of growth in rig counts and other measures in North America. But sales of GE's large equipment would take longer to improve. "We believe it'll begin to turn in 2017," he said. "The speed with which that happens I don't exactly know." Investors had been sceptical that GE's organic revenue growth could hit analysts' estimates of about 5 percent in the fourth quarter, Sanford C Bernstein analyst Steven Winoker wrote in a note. Now, the anemic third-quarter growth "again calls into question the company's ability to hit the 5 percent" target, he said. While strength in GE's healthcare, aviation and renewable energy businesses helped, "there is not going be the significant turnaround in the second half that was originally anticipated," said Jeff Windau, an analyst at Edward Jones in St. Louis. Still, cost-cutting in oil and gas and other businesses and a diminishing drag from foreign exchange translation should allow GE to deliver $2 a share in adjusted earnings in 2018, Chief Executive Officer Jeff Immelt said on a conference call. -Reuters