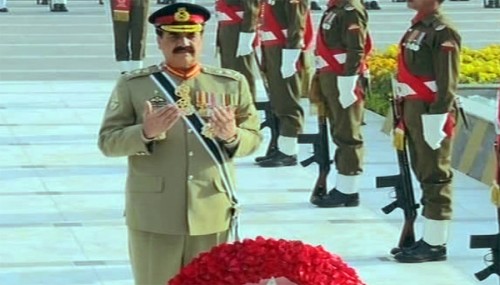 Earlier, General Raheel Sharif and General Qamar Javed Bajwa visited Yadgar-e-Shuhada at GHQ. General Raheel Sharif laid flowers at Yadgar-e-Shuhada. General Raheel Sharif and the contingent of armed forces presented salute to the Shuhada. He also offered fateha. The ceremony was was attended by civil and military leadership including Speaker National Assembly Sardar Ayaz Sadiq, members of the Federal Cabinet, Services Chiefs, parliamentarians and senior civil and military officials. The military band presented tunes of folk and national songs for the amusement of the audience which also included foreign dignitaries.