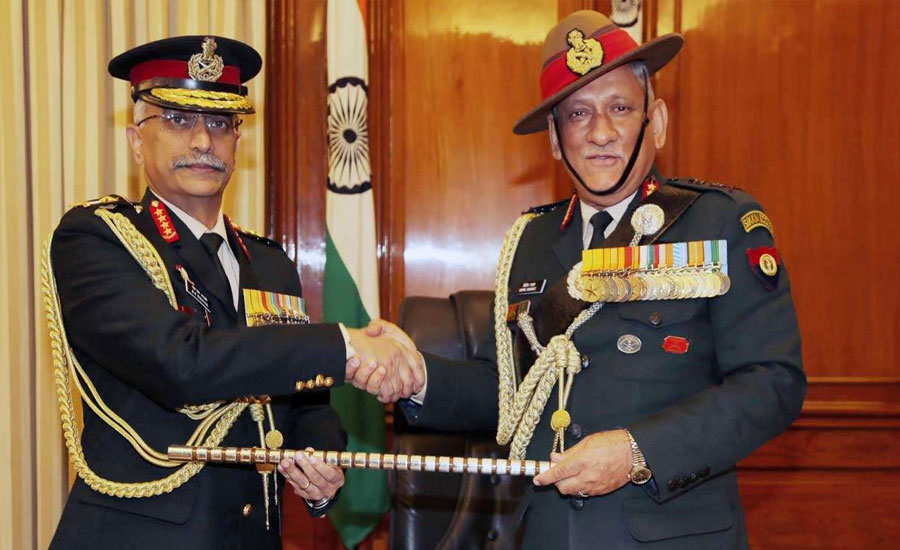 NEW DELHI (92 News) – General Manoj Mukund Naravane on Tuesday took over as the 28th Indian chief of army staff, Indian media reported. Gen Naravane, who was serving as vice chief of the Army, succeeds Gen Bipin Rawat, appointed the country's first Chief of Defence Staff, a post created to bring in operational convergence among the three services. Before being appointed vice chief, the alumnus of the National Defence Academy and the Indian Military Academy headed the Army's Eastern Command that takes care of India's nearly 4,000-km border with China. With Gen Naravane taking charge, all the three services heads, including Navy Chief Admiral Karambir Singh and Indian Air Force Chief RKS Bhadauria, are now from the 56th course of the National Defence Academy. On Monday, the Indian government has amended the Army Act 1950 to appoint Army Chief Gen Bipin Rawat as Chief of Defence Staff. The Indian Defence Ministry has issued a notification in this regard. Keeping in view the circumstances, the India government amended the service rules to appoint Gen Bipin Rawat as Chief of Defence Staff. On December 24, the government had formally established the post of Chief of Defence Staff. Days later, the government amended the rules of the Army, Navy and the Air Force to allow a Chief of Defence Staff to serve until the age of 65. Currently, the three service chiefs retire after either completing three years in office or once they reach the age of 62, whichever is earlier. To the contrary in Pakistan, the matter of extension in the service tenure of COAS Gen Qamar Javed Bajwa is being unnecessarily prolonged. The extension in the service tenure of Gen Bipin Rawat has raised many questions as why the drama of extension has been staged. In India, national security has been preferred, while the executive has been pushed behind in Pakistan. The extension has been made an issue in Pakistan where neither national security issues being faced by the country nor the executive powers have been considered. General Rawat was named the Chief of Defence Staff just a day before he was to retire from service after completing a full three-year term as the Chief of Army Staff. General Rawat is the first officer to hold the post of the Chief of Defence Staff, which was set up just days ago. The CDS will function as a single-point adviser to the government on matters related to the military and will focus on better synergy between the Indian Army, Indian Air Force and the Indian Navy. Lieutenant General Manoj Mukund Naravane, currently the Vice Chief of Army Staff, will take over as Army chief.