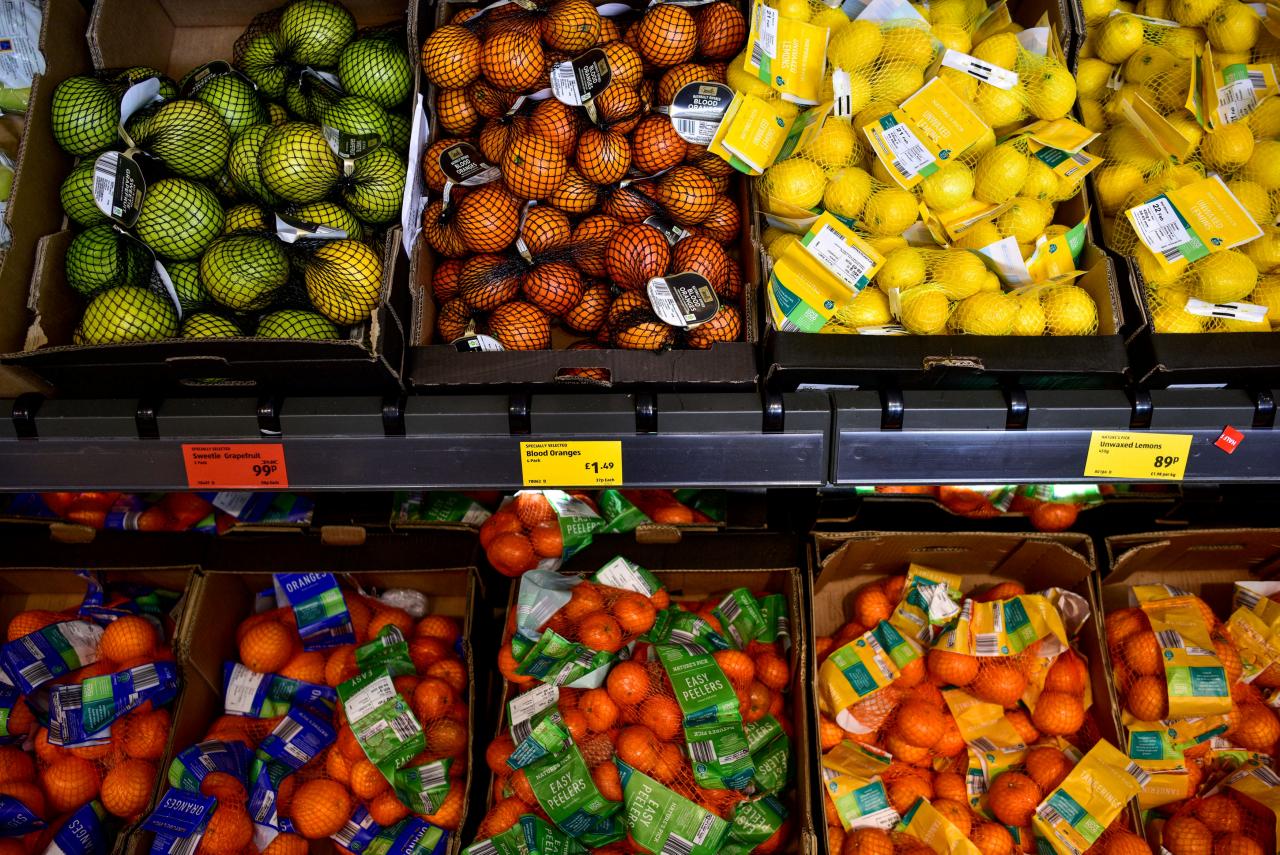 LONDON (Reuters) - German-owned discount supermarkets Aldi and Lidl are ploughing ahead with a rapid expansion in Britain and are on course to grab more market share from the traditional big four players.

Meanwhile, store openings at market leader Tesco, Sainsbury’s, Asda and Morrisons have slowed to a trickle. They are shedding thousands of jobs so they can save money and better compete with the discounters.

Aldi and Lidl’s cut-price model have turned them into two of the world’s biggest retailers. They have expanded abroad as growth stagnated at home.

Aldi launched in Britain in 1994 and Lidl in 1990 and they have changed the shape of the UK grocery market.

But their profits have fallen and traditional retailers have questioned whether the model is sustainable. The discounters also have little presence online and could face competition there from the big four and grocery newcomers such as Amazon.

For now, Aldi and Lidl’s combined share of the 200 billion pound ($283 billion) UK grocery market is set to grow. It will be 15 percent by 2020, up from 12.1 percent currently, according to Ashley Anzie, strategic insight director for grocery at researcher Kantar Worldpanel. “That’s largely driven by the fact that Aldi and Lidl will just physically be opening more stores,” he said.

Aldi and Lidl are also modernising existing stores and making a push into premium ranges that chimes with British shoppers, who, squeezed by inflation and subdued wages growth, have become more cautious in their spending.

Aldi’s 1 billion pounds investment programme to the end of 2018 will create 8,000 jobs. Britain’s departure from the European Union had not changed the company’s plans, Neale said.

This year 70 new stores will be opened and by 2020 some 850 stores will have Aldi’s updated format, from 138 currently, Neale said.

“To further strengthen our position as a British retailer, we will continue to invest in our UK expansion,” said Christian Härtnagel, Lidl UK’s CEO.

Though Britain’s big four have narrowed the price gap with the discounters they have not reversed the trend.

Tesco and Morrisons have reported annual profit growth but that’s partly because their profits were re-based after huge restructurings in 2014. Sainsbury’s has reported three straight years of profit decline and a fourth is forecast by analysts. Asda has seen two years of falls. Over the last year Sainsbury’s and Morrisons shares have fallen 15 percent and 12 percent respectively. Tesco’s shares are up 6 percent but are still below the level they were when Dave Lewis took over as chief executive in 2014.

They are hoping to compete by broadening their businesses. Sainsbury’s purchased general merchandise retailer Argos in 2016, Morrisons has struck wholesale deals with Amazon and McColl’s, and Tesco has just spent 4 billion pounds buying wholesaler Booker.

One senior director of a big four player said the discounters price position was unsustainable. “The underlying brand equity proposition isn’t actually there, it’s just that they are giving it away below economic rational behaviour,” the director said.

Nevertheless, Tesco, Asda and Sainsbury’s have all dabbled with their own discount formats, without success. Tesco is reportedly considering having another go, utilising Booker’s assets. Tesco declined to comment on its intentions.

Aldi, owned by Germany’s Aldi Sud, the world’s No. 5 retailer, has a 7 percent share of the British market, according to Kantar data. Lidl, part of Germany’s Schwarz group, the world’s second biggest retailer behind Walmart, has a 5.1 percent share.

ONLINE PRESSURE The German groups are active in dozens of countries which gives them a purchasing power advantage over local rivals. This means they can offer low prices on a range limited to 1,500-1,800 of mostly own-brand products.

Aldi says it offers a 15 percent price discount to the market “regardless of what the market does”.

But this has squeezed its operating margins.

Lidl does not disclose its UK profitability but analysts estimate its operating margins to have been on a similar trajectory. Aldi and Lidl say they can afford to take a long-term approach as, being privately-owned, they are not beholden to shareholders, unlike their big four competitors. “We’re not fixated on a particular point on the horizon where we have to report a certain set of statistics,” said Neale.

One longer-term threat to Aldi and Lidl’s model could come from ecommerce, where the British supermarkets are trailblazers. The German companies have not embraced ecommerce but Amazon’s entry into selling food online could mean they also have to follow suit.