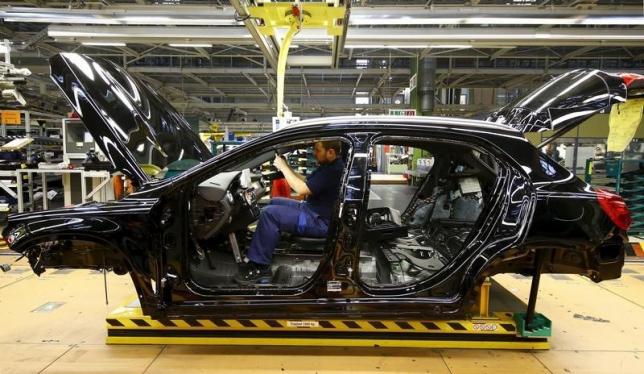 BERLIN - German industrial output looked set to give Europe's biggest economy a modest push for the first quarter of this year after official figures released on Wednesday showed it fell less than expected in February. Following the sector's jump in January, the weaker than expected dip gave analysts some relief after data on Tuesday showed industrial orders unexpectedly dropped in February due to weaker foreign demand, particularly from euro zone countries. The global economic slowdown has also been causing concern for Germany's export-reliant economy. Industrial output edged down 0.5 percent in February on the month, data from the Economy Ministry showed, well above the mid-range forecast in a Reuters poll for a 1.8 percent decline. "Looking at January and February together, the picture is looking bright. Industrial production is pointing upward," Dekabank economist Andreas Scheuerle said, adding the data pointed to 0.5 percent GDP growth in the first quarter. "But nobody should take this as a sure-fire success for the rest of the year. The problems on global sales markets are not solved yet," he added. UniCredit agreed, writing in a research note: "Overall, industrial activity is set for a healthy performance in 1Q16." The energy sector and factories producing consumer goods and investment products reported particularly weak output figures in February while construction companies posted strong gains. The January reading was revised downward to an increase of 2.3 percent after an initially reported hike of 3.3 percent. "Overall, the industrial sector got off to a relatively good start in 2016 although seasonal factors led to shifts in production and the construction sector benefited from the mild winter," the Economy Ministry said in a statement. The manufacturing and construction sectors are expected to post solid gains in the first quarter, the ministry added. The German economy is experiencing a construction boom as record-low borrowing costs encourage many Germans to overcome their traditional aversion to buying their own flats and houses, with some also regarding property as an attractive investment. The booming construction sector is currently one of the main growth drivers in Germany. In the last three months of 2015, construction investment and state spending were the two biggest growth contributors while net foreign trade was a drag. In the whole of 2015, strong private consumption and higher state spending drove an overall economic expansion of 1.7 percent. But most analysts doubt that German growth this year will surpass that pace. Commerzbank analyst Ralph Solveen said today's data pointed to the economy growing at a faster pace in the first quarter compared to the previous quarters. In the third and fourth quarter 2015, the German economy grew by 0.3 percent each. The country's leading economic institutes will update their joint growth forecast for 2016 on April 14 and the government is expected to publish its own updated forecast on April 20. -Reuters