German-Iranian gunman kills nine in Munich, then himself: police 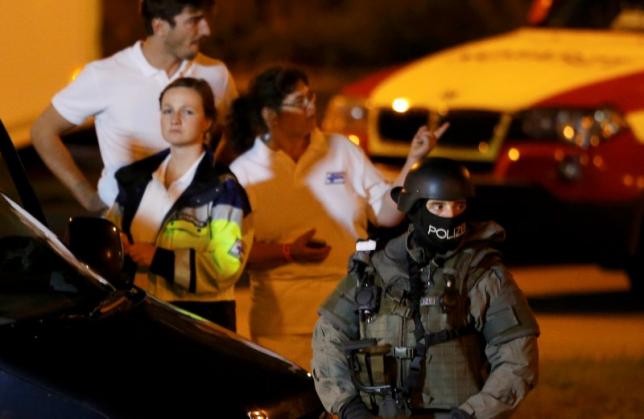 German-Iranian gunman kills nine in Munich, then himself: police

MUNICH – An 18-year-old German-Iranian gunman who apparently acted alone opened fire near a busy shopping mall in Munich on Friday evening, killing at least nine people in the third attack on civilians in Western Europe in eight days. The pistol-wielding attacker, identified by Munich Police Chief Hubertus Andrae as a dual national from Munich, was later found dead of a suspected self-inflicted gunshot wound. Authorities said it was too early to say whether it was a terrorist attack, and said they had no immediate evidence of an Islamist motive. Chancellor Angela Merkel is due to meet her chief of staff, Peter Altmaier, and Interior Minister Thomas de Maiziere and a host of intelligence officials on Saturday to review the incident. Police, citing witnesses, had initially said they were looking for up to three suspects and were treating the incident as a suspected terrorist attack. But authorities told a news conference early on Saturday the shooter was believed to have staged the attack alone, opening fire in a fast food restaurant before moving to the mall. Andrae said authorities did not see similarities to an attack in southern Germany last Monday in which an axe-wielding 17-year-old asylum-seeker killed five people in an incident claimed by the Islamic State group. Andrae said it was premature to say whether the Friday incident was a terrorist attack, as French President Francois Hollande said, or the work of a deranged person. Police said they were investigating a video in which the gunman is seen and heard exchanging racial slurs and profanities with another man. "We are trying to determine who said what," a police spokesman said. There was no known motive for the shooting in Germany's third largest city, which went into lockdown with transport halted and highways sealed off immediately after the attack. U.S. intelligence officials, speaking on condition of anonymity, said initial reports from their German counterparts indicated no apparent link between the shooter and Islamic State or other militant groups. It was the third major act of violence against civilians in Europe in eight days. Previous attacks in France and Germany were claimed by Islamic State. At least 16 people, including several children, were in hospital and three were in critical condition, Andrae said. There was no immediate claim of responsibility but supporters of Islamic State celebrated on social media. "The Islamic state is expanding in Europe," read one tweet. The gunman, whose body was found on a side street near the mall, was not identified but Andrae said he was not previously known to police. Police commandos, armed with night vision equipment and dogs, raided an apartment in the Munich neighborhood of Maxvorstadt early on Saturday where the German newspaper Bild said the gunman lived with his parents. "He lived right next to me," Bild quoted a neighbor as saying. "A friend of mine went to school with him and said he was rather a quiet guy. He recognized him from the videos from the scene." The men had notified police about their suspicion three hours before the police raid. A police spokesman said police did not release names of suspects, even if they were killed, due to privacy concerns. ANNIVERSARY The mall is next to the stadium where the Palestinian militant group Black September took 11 Israeli athletes hostage and later killed them during the 1972 Olympic Games. Friday's incident snarled traffic as authorities blocked highways, closed the main railway station, and shut down public transport. A police spokesman initially said up to three gunmen were on the run after the shooting. The Bavarian capital was placed under a state of emergency as police hunted for them and special forces were deployed. Two individuals were seen driving quickly away from the scene, but they were later cleared of any wrongdoing, the police chief said. Nearly three hours after the shooting, authorities found a body about 1 km (0.6 miles) from the scene that was later determined to be the gunman. German radio station Bayerischer Rundfunk said the man had a red backpack similar to one used by a gunman seen at a McDonald's restaurant where the attack reportedly began. It said police were using a robot to investigate the backpack. German news magazine Focus said the man had shot himself in the head. Friday was also the fifth anniversary of the massacre in Norway by Anders Behring Breivik, who killed 77 people. Breivik is a hero for far-right militants in Europe and America. Thousands of people had been crowding the streets and squares in Munich's city center on Friday for a beer festival. "There were a few people who came running towards us who were screaming and in panic. But mostly it was surprisingly calm," said Elena Hakes, wearing a blue traditional dress, who had been with a friend in the Odeonsplatz square. The incidents in Germany follow an attack in Nice, France, in which a Tunisian drove a truck into crowds celebrating Bastille Day, killing 84. Islamic State claimed responsibility. The Munich assault was also reminiscent of militant attacks in a shopping mall in Nairobi, Kenya, in 2013, and in Mumbai, India, in 2008. Norwegian Foreign Minister Borge Brende said on Twitter: "Horrible killings in Munich. Taking place on the same day as we mourn & remember the appalling terror that hit Norway so hard five years ago." –Reuters