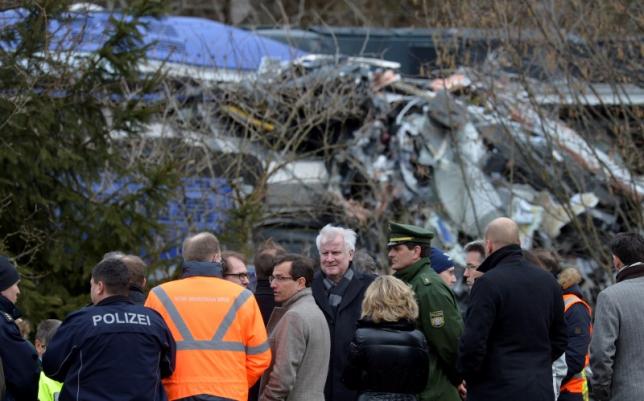 BAD AIBLING/BERLIN - German prosecutors and police investigating a head-on train crash in Bavaria that killed ten people are focussing on the actions of a signal controller, a source involved in the inquiry told Reuters.

However, investigators said it was too early to speculate on the cause and that they have recovered two of three black boxes from the two passenger trains that collided at peak commuter time on Tuesday morning. "The investigations are focussing on the controller," said the source, who declined to be named. The single track stretch was opened for both trains, the source said.

The source did not name the controller. Reuters was unable to determine the identity of the controller or what actions were under scrutiny.

In addition, Reuters could not determine if other individuals were also under scrutiny. A spokeswoman at state-run railway, Deutsche Bahn [DBN.UL], which is responsible for the track, said the company was working with investigating authorities. "We do not want to pre-empt the results of the investigation," she said.

German Transport Minister Alexander Dobrindt, echoing statements from investigators, said that it was too early to identify the cause. "We have no knowledge whether this was down to human failure or a technical problem," he said.

Cooperating closely with investigators, salvage workers and criminal police were combing the site on Wednesday and working to recover the carriages that were lying on their side in the wooded area with a river on one side of the track.

The trains, carrying about 100 people in all, crashed at high speed on a 6 km (four-mile) stretch of track between the spa town of Bad Aibling and Kolbermoor, near the Austrian border.

The trains and track were fitted with an automatic brake system that was introduced across Germany after 10 people died near the eastern city of Magdeburg in 2011 when a train driver drove through two red signals. -Reuters