Germans downbeat on chances of Greek deal next week 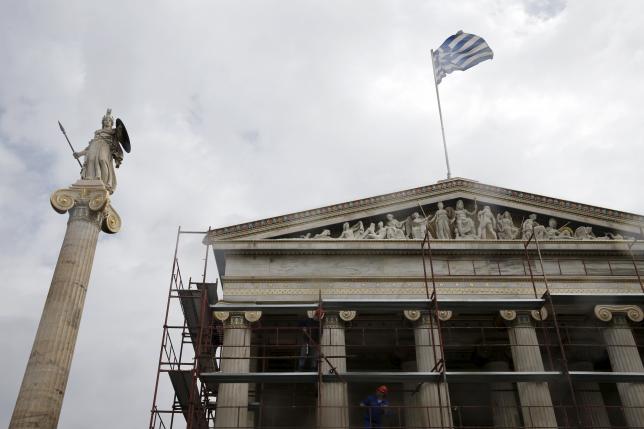 Germans downbeat on chances of Greek deal next week

NEW YORK/ATHENS - Germany's finance minister said on Wednesday there was no prospect of theeuro zone reaching a deal with Athens next week on economic reforms that would unlock bailout funds, potentially leaving Greece perilously short of money. Both the Greek government and its creditors have said they need to reach at least an outline agreement at an April 24 meeting of euro zone finance ministers in Latvia's capital Riga. But Athens, which has signalled it may not have enough cash to keep up payments to international creditors in May, has yet to produce a programme of reforms that is deemed acceptable. German Finance Minister Wolfgang Schaeuble told the Council on Foreign Relations in New York that no one expected a deal at the Riga meeting or in the coming weeks. "No one has a clue how we can reach agreement on an ambitious programme," he said, adding that Greece's new leftist-led government had "destroyed" all the economic improvements achieved by Athens since 2011. The veteran conservative minister appeared to suggest that the euro zone could cope with a Greek default, saying markets had "priced in" all possible outcomes to Greece's debt woes and there was no contagion to other euro zone sovereign borrowers. Standard & Poor's decision to downgrade Greece's credit rating to CCC+ with a negative outlook, citing the prolonged negotiations, suggested it sees default as increasingly likely. In Brussels, European Commission President Jean-Claude Juncker, who has tried to mediate with Greek Prime Minister Alexis Tsipras, told a closed-door meeting of the EU executive that his patience with Athens was wearing very thin and there had been no progress in recent days, an EU official said. But he said Juncker had insisted there should be no contingency planning for a possible Greek exit from the euro zone. "A 'Grexit' is a taboo topic for Juncker," the official said. In Berlin, a Finance Ministry spokeswoman said euro zone countries could not realistically pay out new aid to Greece this month because of the complex process required. Slovak Finance Minister Peter Kazimir echoed Schaeuble's gloom about the chances of a breakthrough next week. "Given that we have lost a lot of time, I am sceptical," Kazimir told reporters after a Slovak cabinet meeting. Greek Prime Minister Alexis Tsipras, elected on a promise to end austerity, is balking at pension and labour market reforms to which his conservative predecessor had agreed. EU sources say Brussels is pushing Athens towards more rapidly applicable measures to liberalise markets for products and services instead. Athens is dangerously close to running out of cash, with its reserves expected to dip into negative territory after April 20, a source familiar with the matter has previously said. The government could get by for another couple of weeks by using one-off measures or trying to raid the last remaining cash reserves at state entities -- a tactic it has been using in recent months. But without a deal in Riga, Athens could be forced to choose between making 1.6 billion euros of wage and pension payments at the end of this month or about 1 billion euros of debt payments due in May, mostly to the IMF. WORLD WATCHING The world is watching. Greek Finance Minister Yanis Varoufakis will be in Washington later this week for G20/IMF meetings at which his ministry said he will meet both U.S. President Barack Obama and European Central Bank President Mario Draghi. The German finance ministry spokeswoman said that, even after a ministerial agreement,Greece would have to pass new laws and its creditors would want to review progress. "If people are under the impression that aid could be paid out in April, I think this is wrong," she said. In the meantime, the ECB is keeping Greek banks afloat with emergency loans to cope with heavy deposit outflows and raised the ceiling for that lending to 73 billion euros (53 billion pounds) on Tuesday. Draghi said on Wednesday there was no date for ending it, adding that it was "entirely depending on the conditions that will be in place" after talks between Greece and its lenders. Speculation has been rife in recent days that Tsipras may call a snap election if Greecedoes not secure outside help, something his government has strongly denied. "There is no point in calling elections," State Minister Alekos Flabouraris told Greek TV. "They took place two months ago, we received a specific mandate which we will serve. We do not need elections, I rule it out 100 percent," he said. Athens sold 812.5 million euros ($859 million) of three-month Treasury bills on Wednesday, successfully covering the entire amount it sought to raise in the second of two auctions this month that tested its ability to find funds. European Commission Vice President Valdis Dombrovskis told Reuters on Monday thatGreece was not moving fast enough to draw up structural reforms and time was running short to prevent it running out of cash. The head of the euro zone's rescue fund, Klaus Regling, said in Washington that Greececould reach debt sustainability without having to impose another "haircut" on creditors, as it did in 2012 when private bondholders took heavy writedowns. - Reuters