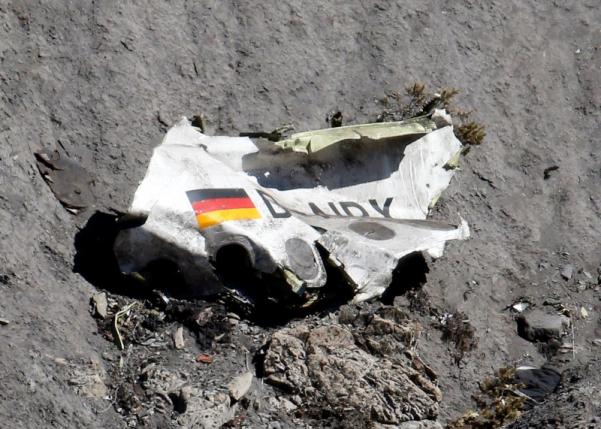 PARIS - The co-pilot of a Germanwings jet that crashed in the French Alps increased the airplane's speed before it crashed killing all 150 people on board, according to French investigators. France's BEA crash investigation agency said on Friday it was still reconstructing the flight, but the chilling new detail from a second 'black box' data recorder appeared to corroborate prosecutors' suggestions that the co-pilot acted deliberately. "A first reading shows that the pilot in the cockpit used the automatic pilot to put the airplane on a descent toward an altitude of 100 feet," the BEA investigation office said in a statement. "Then several times the pilot modified the automatic pilot settings to increase the speed of the airplane as it descended," it added. The data was extracted from a charred and badly dented flight data recorder discovered on the mountainside crash site 6,000 feet above sea level on Thursday. The box arrived at BEA headquarters outside Paris under police guard on Thursday evening and investigators immediately set to work reconstructing the last moments of Flight 9525. Sticking to a purely factual reading of initial data, the BEA did not speculate on which pilot is thought to have entered the commands in the autopilot, which is governed by a single set of knobs sitting on a console between the two pilots. Nor was it immediately clear whether the pilot was deliberately accelerating the plane toward the mountain or changing speed settings according to the altitude, which affects the way speed is measured in the cockpit. But the brief actions described by the BEA appeared to confirm a picture painted by prosecutors of methodical and controlled actions as the aircraft sped toward the ground. ANALYZING DATA Prosecutors have said the cockpit audio recording from the first 'black box' suggested that 27-year-old German co-pilot Andreas Lubitz locked the captain out of the cockpit and veered the plane into a descent. As he barricaded himself at the Airbus A320's controls, he appears to have ignored efforts by his senior colleague to bash his way through the cockpit door of the 24-year-old jet, which had been reinforced under rules to protect pilots after 9/11. The flight data recorder contains a detailed readout of hundreds of parameters, including any commands made from the co-pilot's seat on the Duesseldorf-bound flight. It would also show inputs to shared controls such as the flight control unit, which sends orders to the autopilot, and show movements of pilot seats that might confirm which pilot had remained at the controls while the other left the cockpit. The BEA now faces the laborious task of synchronizing data with cockpit recordings and radar tracks, a process that can take several weeks. It did not say whether it had been able to download all data from thermally protected memory strips intact. The BEA, whose mandate is to prevent future accidents, signaled its intention earlier this week to complete its own safety investigation and deliver a final report whatever the outcome of separate judicial probes. It said it would focus on cockpit door mechanisms and pilot screening, in a sign that it could issue recommendations that might trigger a rethink on regulation worldwide. Lubitz's motives remain a mystery but investigators have uncovered growing evidence that he had made suicide preparations ahead of the doomed flight. German prosecutors said on Thursday that Lubitz had made Internet searches on ways to commit suicide in the days ahead of the crash as well as searches about cockpit doors and safety precautions. Germanwings parent Lufthansa has said that Lubitz had told its flight school in 2009 that he had gone through a period of severe depression. As part of the crash probe, German prosecutors searched the offices of five doctors whose help Lubitz had sought, Der Spiegel magazine reported on Friday. - Reuters