Germany says it's too early to reward Iran after nuclear talks 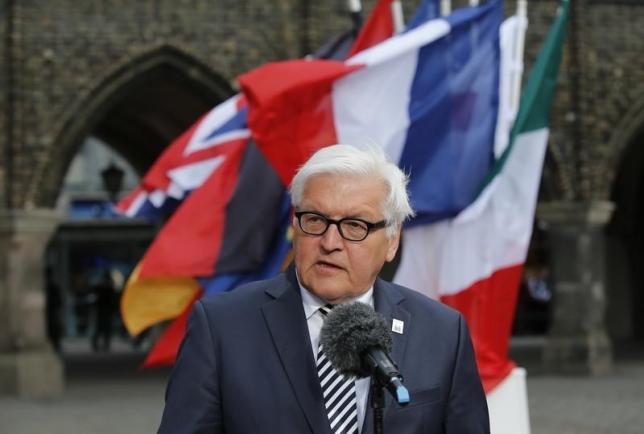 Germany says it's too early to reward Iran after nuclear talks

LUEBECK, GERMANY - German Foreign Minister Frank-Walter Steinmeier spoke out on Tuesday against Russia's decision to prepare to deliver missile systems to Iran, and his Italian counterpart suggested it was too soon to reestablish economic ties with Iran. The foreign ministers were speaking in the northern German city of Luebeck. About 3,500 police, many clad in riot gear and equipped with water canons, were on the streets to protect a meeting of Group of 7 foreign ministers amid fears of another anti-capitalist rally like the violence that broke out in Frankfurt last month in front of the European Central Bank's headquarters. "We're in the middle of a process," Steinmeier told reporters, referring to Iran. "I've told some U.S. senators that they should not now try to unnecessarily impede further negotiations. But I'll also say that it is also too early to talk about rewards at this stage." The Kremlin confirmed on Tuesday that an oil-for-goods barter deal between Russia andIran was being implemented, and officials said the road was clear for Moscow to supply an advanced S-300 anti-missile system to Tehran. The latest statements from Moscow coincide with politically sensitive negotiations on a final accord between Iran and the United States, Britain, France, Russia, China andGermany on Tehran's disputed nuclear program. Italian Foreign Minister Paolo Gentiloni said it was normal that countries would race to reestablish ties with Tehran once sanctions against Iran started to be canceled, but warned: "First, however, a goal must be reached. It probably doesn't help to get ahead of things," Italian news wire askanews reported. Gentiloni added that Italy would be among the first countries to reopen economic links with Tehran once a final accord was reached and sanctions were gradually lifted. Steinmeier said the preliminary deal agreed by Iran and six world powers was a "good basis" on which to try and draw up a final deal by June 30. "Then we'll be able to say how the relationships not only between those involved in negotiations but also the economic relationships between Iran and Europe can develop further." Russia moved quickly to cement ties with Iran after an interim deal was reached on curbing the Islamic republic's nuclear program in exchange for removing economic sanctions. President Vladimir Putin lifted a self-imposed ban on delivering the air defense system toIran. [ID:nL5N0XB1X7] Russian Foreign Minister Sergei Lavrov was not invited to the foreign ministers' meeting in Luebeck. Speaking at an event with German students, Steinmeier said many international conflicts could not be solved without Russian involvement, so he did not want Russia to be excluded. But Moscow needed to move toward solving the Ukraine crisis before it could be included in such meetings again, he said. "I have no interest in Russia being permanently isolated -- we know from history that someone who is isolated can develop more dangerously than someone who is not," he said. German authorities were eager to prevent a repeat of the anti-capitalism violence that marred the opening of the new ECB headquarters on March 18, in which 94 police officers were injured and seven police cars set on fire. [ID:nL6N0WK1PG] Police said around 1,800 protesters from the group "Stop G7" were in Luebeck. Some shops closed in the afternoon. "Fight war. Smash capitalism," read one banner. Nerves in Germany are running high before the G7 summit at an isolated castle in the Bavarian Alps on June 7-8. - Reuters