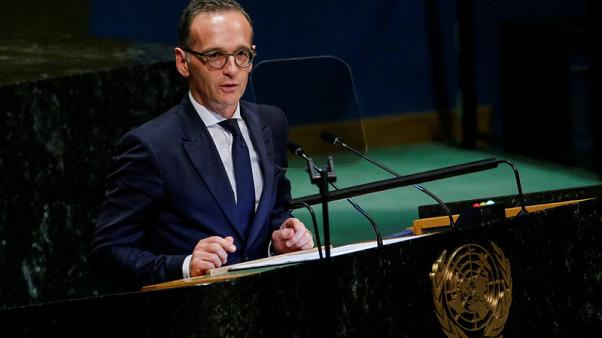 BERLIN (Reuters) - German Foreign Minister Heiko Maas said he will press China to embrace arms controls during upcoming meetings in Beijing, citing the need to regulate robotic and space-based weapons that could soon shift from “science fiction” to reality. Maas told German newspaper Die Welt that Germany would continue to press both Washington and Moscow to adhere to the 1987 Intermediate-Range Nuclear Forces (INF) Treaty, and said it made sense to include China in future agreements. President Donald Trump on Oct. 20 announced plans to quit the INF Treaty, citing what he sees as Russian violations of the pact and concerns about China’s development of new weapons since it was not party to the treaty. Maas said it was imperative to create a disarmament regime that included emerging weapons systems and China. “Space weapons and autonomous weapons will soon no longer be science fiction, but possible reality,” he told the newspaper. “We need rules that keep pace with the technological development of new weapons systems.” Maas gave no details of his plans to visit China, but said he would use his discussions with Chinese officials in “the next days to advocate for greater transparency and arms controls.” He said Germany remained in close discussions with the United States and its partners in NATO about the INF Treaty and wants to prevent a new arms race. NATO foreign ministers are due to discuss the issue in December. Maas said he had also urged Russian Foreign Minister Sergei Lavrov to stick to the INF Treaty and be transparent about its development of new weapons, something that had not occurred to date.