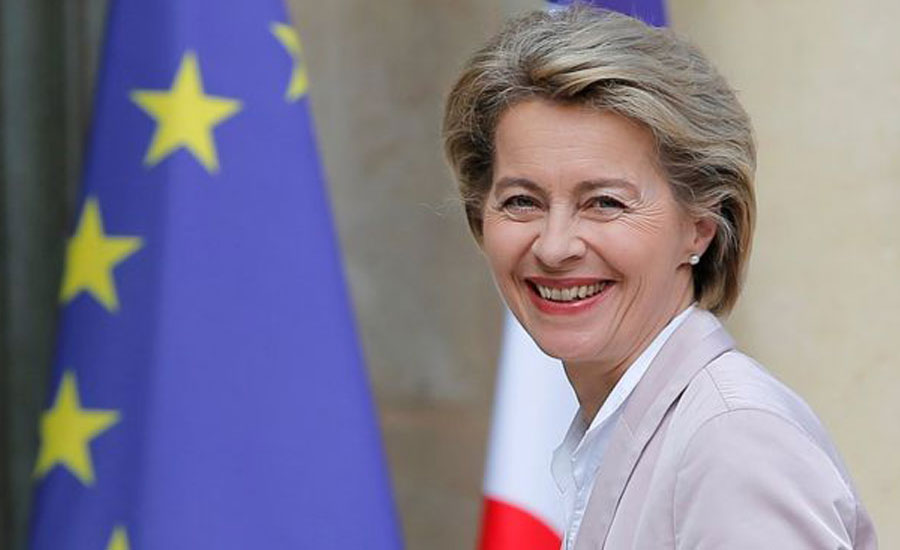 BRUSSELS (Web Desk) - European Union leaders have nominated German Defence Minister Ursula von der Leyen, the first woman for the top job, to head up the European Commission as part of a proposal over who should run the EU’s top institutions, German Chancellor Angela Merkel said. “For the position of Commission president, Ursula von der Leyen was nominated unanimously with one abstention,” Merkel told reporters in Brussels after tortuous marathon talks. “This abstention came, in line with the rules of German voting conduct, from me,” she added. “We agreed this in the coalition: that if there is no unanimity, then one abstains. But one can say this (nomination) has been approved today without any opposition.” The surprise choice of German Defence Minister Ursula von der Leyen to replace Jean-Claude Juncker came after the main front-runners were rejected. IMF chief Christine Lagarde has been nominated as the first woman to head the European Central Bank (ECB).

In all, EU leaders were tasked with nominating five people for the top jobs.

The fifth key role - president of the European Parliament - is to be chosen on Wednesday. Possible candidates include German centre-right MEP Manfred Weber and Bulgarian socialist Sergei Stanishev.

Most of the roles must be ratified by parliament.

Is everyone happy with the choices?

"We have agreed the whole package before the first session of the European Parliament," said Mr Tusk.

He said Germany had abstained on Mrs Von der Leyen's nomination over coalition issues but pointed out that Chancellor Angela Merkel herself had backed her.

French President Emmanuel Macron said the nominations were "the fruit of a deep Franco-German entente".

"Von der Leyen is a very good candidate and a very good choice to head the European Commission," he told reporters, adding that Ms Lagarde's "capacities and competences... totally qualified her" for the ECB.

Irish Prime Minister Leo Varadkar said the nomination of two women for key jobs sent a powerful message that the EU was leading the way towards gender equality. However, there were concerns that the European Parliament's own contest for the main job - the "Spitzenkandidaten" (lead candidate) process - had been cast aside. Neither the winner of that process, Manfred Weber of Germany, nor other frontrunners were selected by EU leaders. "You have to compromise in politics," Mr Varadkar insisted, adding that the centre-right Mr Weber would most likely be given the shared presidency of the European Parliament along with a Socialist figure. There was also surprise that four of the main jobs had gone to Western Europeans, with no nominations from Eastern Europe. However, the eastern states are thought to have been strongly behind Mrs Von der Leyen's nomination, having rejected a compromise involving Dutch Labour leader Frans Timmermans the night before. SOURCE: REUTERS, BBC NEWS