MAKKAH (92 News) – The annual ceremony to change the Ghilaf-e-Kaaba held in early morning on Saturday in Saudi Arabia, where millions of Muslims have gathered to perform the Hajj. According to the details garnered, the new cover has been prepared with estimated 120 kg pure gold, 100 kg silver and 670 kg silk fiber. Approximately 7 million riyals have been spent on the preparation of the Ghilaf-e-Kaaba. 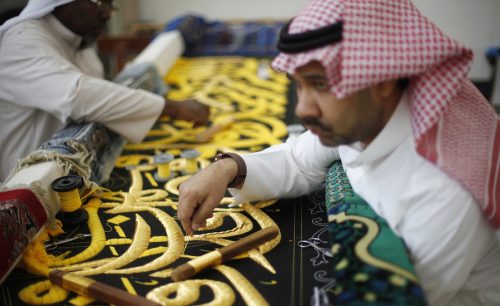 The holy Kaaba is dressed in its new Kiswa on the Day of Arafat every year.The ‘Kiswa’ is woven from pure silk, and embellished by gold-plated thread illustrating verses from the Holy Quran. It is classified as a work of Islamic art produced by top-skilled craftsmen. The cover, inscribed with verses from the Holy Quran, is prepared in Dar-ul-Kiswa factory, which was established 78 years ago. The gold Ghilaf, that covers four walls and the door of Kaaba, will be torn into pieces and gifted to foreign dignitaries. The government officials and foreign dignitaries attending the ceremony which started after Fajr prayer that would take several hours till completion. Hajj is one of the five pillars of Islam and comprises a journey to Makkah to perform religious rituals described in the Holy Quran. The new cover has been prepared with estimated 120kg pure gold and 100kg silver that is imported from foreign countries and 670kg silk fibre which is brought from Italy.