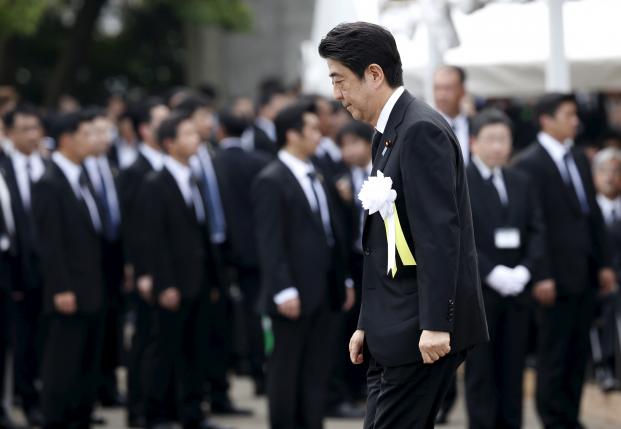 TOKYO - Seventy years after Japan's defeat in World War Two, the conflict's legacy haunts East Asia and reconciliation remains elusive. Prime Minister Shinzo Abe may hope to lay the ghosts to rest with a statement on Friday marking the 70th anniversary of the war's end, but risks inflaming tension instead. Abe is expected to express "deep remorse" in his comments. But China and South Korea, where bitter memories of Japan's past militarism run deep, want Abe to stick to a landmark 1995 "heartfelt apology" by then-premier Tomiichi Murayama for suffering caused by Japan's "colonial rule and aggression". Abe himself wants to keep a thaw in Sino-Japanese ties on track ahead of a possible visit to Beijing. He also needs to satisfy ally the United States, which is keen to see tension ease in a region where concern is rising over China's military assertiveness. Abe's conservative supporters, however, want to end what they see as a humiliating cycle of apologies. "What Abe has to do for smooth sailing is to say something his friends inside the Beltway can sell in Washington," said Andrew Horvat, visiting professor at Josai International University in Tokyo, referring to Washington insiders. "The Murayama Statement is the 'gold standard' but we know that Abe, in his heart of hearts, doesn't want to say what the Murayama Statement said," Horvat added. "Abe will attempt to satisfy as many parties under the circumstances as possible." Abe has said he upholds past official remarks on the war, including the Murayama Statement and a 1993 apology to "comfort women", as those forced into prostitution and sexually abused at Japan's wartime military brothels are euphemistically known. But Abe, who critics view as a revisionist who wants to play down Japan's wartime acts, has stressed he wants to issue a forward-looking statement in his own words. NHK public television said this week Abe would include the word "apology". Other media said that touchy issue was still being worked out. Abe will mention "colonial rule" and "aggression", media said, but the reference to the latter could be a general criticism that does not single out Japan's invasion of China. Whatever Abe says, disputes over history are unlikely to fade any time soon, given dynamics in the region that sustain the feuds. Governments in China and South Korea have often used anti-Japanese sentiment to win support, while Japanese conservative politicians periodically play to a base that includes atrocity deniers as well as those suffering from "apology fatigue". - Reuters