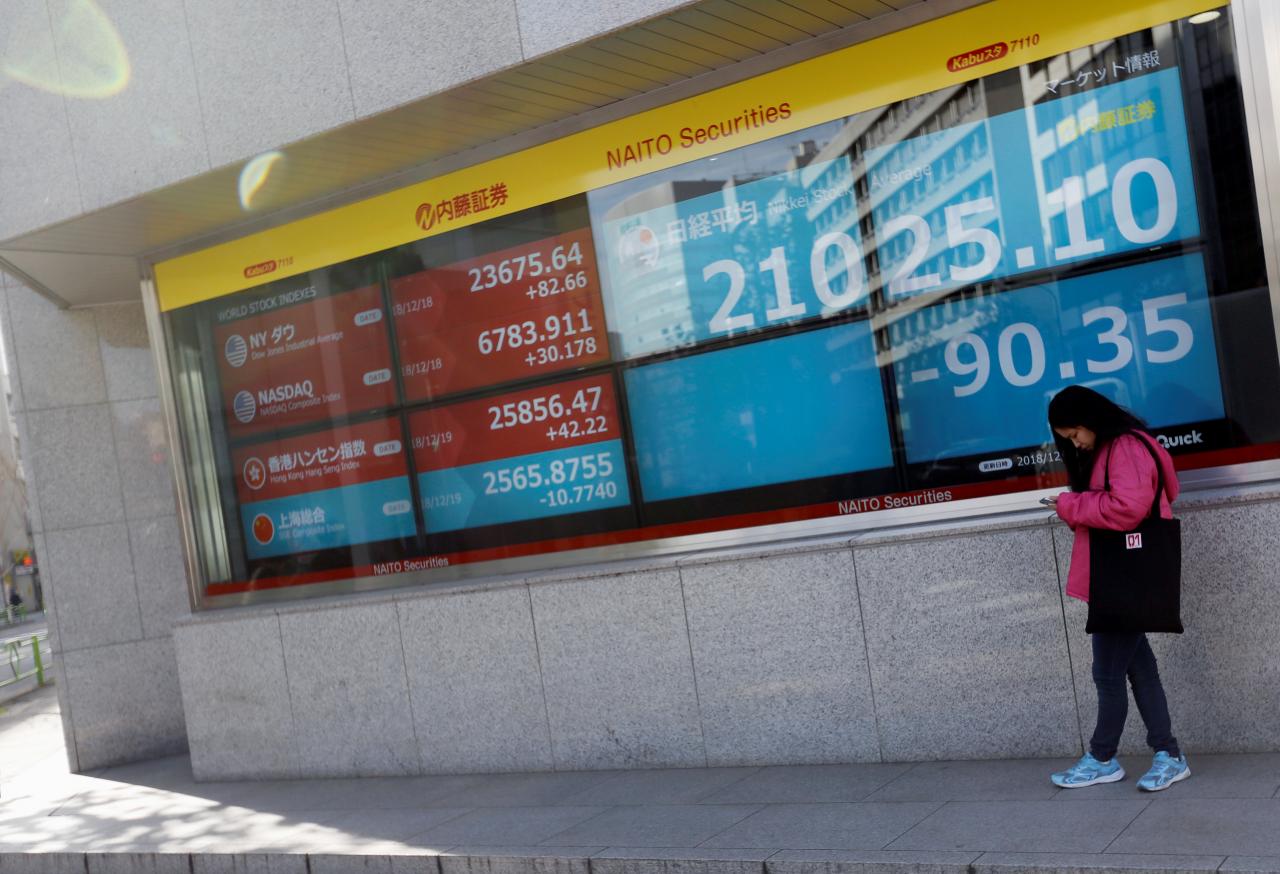 TOKYO (Reuters) - Asian shares retreated on Thursday after the US Federal Reserve raised rates, as expected, and kept most of its guidance for additional hikes next year, dashing investor hopes for a more dovish policy outlook. MSCI’s broadest index of Asia-Pacific shares outside Japan dropped 1.3 percent, with Australian shares slipping as much as 0.7 percent to two-year lows. Japan’s Nikkei shed 1.7 percent to fresh nine-month lows. China’s benchmark Shanghai Composite and the blue-chip CSI 300 fell 0.8 percent and 0.9 percent, respectively, while Hong Kong’s Hang Seng was off 0.7 percent. In New York, U.S. S&P 500 Index lost 1.54 percent to hit its lowest level since September 2017. US stocks are on pace for their biggest December decline since 1931, the depths of the Great Depression. “I think the Fed may be underestimating other factors at play,” said Bob Baur, chief global economist at Principal Global Investors in Des Moines, Iowa in the Unites States. “Trade has been making headlines, but I think a gradual tightening of monetary policy has been the driving force behind recent market volatility. With corporate borrowing and spending still high, and the Fed continuing to reduce its balance sheet, I’d expect volatility to remain if this tightening continues,” he said. The Fed raised key overnight lending rate rates by 0.25 percent point as expected to a range of 2.25 percent to 2.50 percent. It said “some further” rate hikes would be necessary in the year ahead, with its policymakers projecting two rate hikes on average next year instead of three they saw back in September, a change that was also largely in line with expectations. But the slight revision was not enough to ease market fears over a further U.S. economic slowdown on the back of trade tensions, a waning boost from tax cuts and tightening monetary conditions for companies. U.S. junk bonds were sold off sharply, with their ETFs falling 0.9 percent, the biggest decline since March 1. As investors flocked to the safety of government bonds, the 10-year U.S. Treasuries yield fell below its May 29 low of 2.759 percent to as low as 2.750 percent, a level last seen in early April. A rise in short-term interest rates and a fall in the long-date yield rekindled worries of an inversion in the yield curve, where shorter-debt yields become higher than longer-term ones. Historically, an inversion between short-yields, such as three-month and two-year yields, and 10-year yields has been seen as a fairly reliable indicator of a recession down the road. “We expect additional rate hikes will invert the three-months to 10-year yield curve which is a reliable signal for a bear market for stocks and a coming recession for both the U.S. and the rest of the world,” said Jeffrey Kleintop, Chief Investment Strategist at Charles Schwab in Boston. “So, seriously something to keep a close eye on. We do expect a very difficult year for investors.” The two-year US yield stood at 2.665 percent, just 0.111 percent less than the 10-year yield. As one 25 basis point rate hike would likely invert the yield curve, many market players are sceptical whether the Fed can raise rates at all next year. Fed funds futures are now pricing in only about 50 percent chance of one rate hike. The dollar bounced back against major currencies after the Fed was perceived to be more hawkish than anticipated. The euro traded at $1.1382, off Wednesday’s high of $1.14395 hit before the Fed’s policy announcement. The dollar stood at 112.50 yen, boun cing back from a seven-week low of 112.09 touched just before the Fed. “Traders sold the dollar yesterday, on hopes today’s Fed would be even more dovish,” said Kengo Suzuki, chief FX strategist at Mizuho Securities. China’s yuan weakened in early Asian trade after the country’s central bank left its short-term borrowing rates unchanged on Thursday, choosing not to follow its U.S. counterpart. The yuan weakened past the 6.91-to-the-dollar level and was last trading at 6.9136 per dollar, 0.3 percent weaker than the previous day’s close. Commodity currencies fared worse due to weak oil prices.