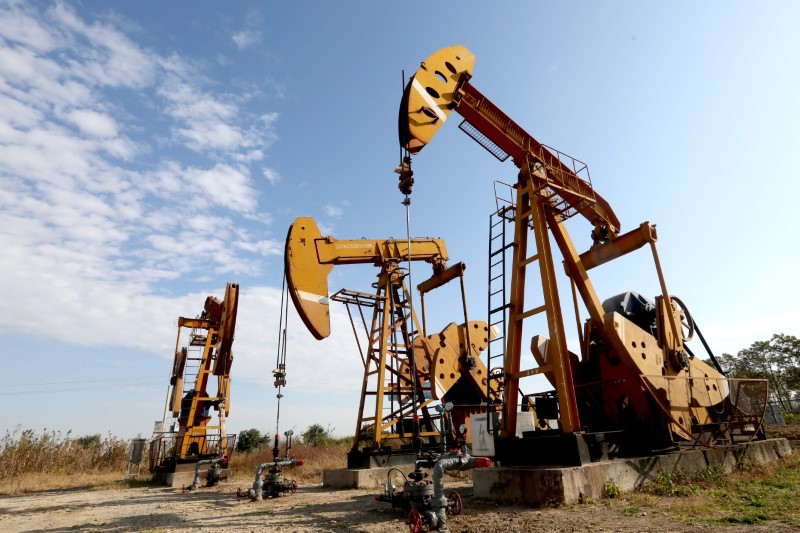 NEW YORK (Reuters) - Worries over global oil pricing and pipeline constraints are hanging over the energy sector as US companies begin to report quarterly results, with many producers' shares trading lower on the year. Third-quarter profits for oil producers generally should be higher than a year ago, because the average price per barrel was up about 44 percent over the same period last year. But oil prices  registered their third straight weekly decline, extending a slide on concerns that slower global economic growth and the US-China trade war could dent demand. US crude CLc1 is on track for a decline of roughly 8 percent for the month, while the S&P 500 energy index .SPNY is down 12.2 percent so far in October compared with the benchmark S&P 500's  8.8 percent decline. US crude prices CLc1 averaged $69.43 a barrel in the third quarter, up sharply from $48.20 a year earlier. Analysts expect this helped boost S&P 500 energy companies' quarterly earnings 102.9 percent, the biggest expected year-over-year growth among sectors, according to I/B/E/S data from Refinitiv. That would be the biggest expected year-over-year percentage growth of any sector for the quarter. Still, some investors say it may not be enough to reverse the trend in shares given trade and other worries. "I expect earnings will be good because the last quarter's prices were good," said Rick Meckler, partner at Cherry Lane Investments, a family investment office in New Vernon, New Jersey. But, "it has been very difficult for these companies to forecast pricing because it has been so volatile," he said. Companies that provide drilling and other work for US producers have blamed a near-term slowdown in services demand due to pipeline and other constraints, particularly in the West Texas shale fields. While US sanctions against Iranian oil exports could support prices in the coming months, top exporters Saudi Arabia and Russia have been signalling they expect to increase production, which should limit increases. Upcoming earnings reports, with Exxon Mobil  and Chevron  both due Nov. 2, could reflect those issues. Exxon is down nearly 9 percent for the month to date, while Chevron also is down almost 9 percent. "We've seen oil prices sell off here throughout the correction we've had in the broad market. The concern in the sell-off is clearly global growth, and that's immediately reflected in oil prices," said Tim Ghriskey, chief investment strategist at Inverness Counsel in New York. UBS analysts expect oil demand to grow more slowly in 2019, on higher oil prices and weaker economic growth. Another producer, Hess Corp , is due to report Wednesday, while ConocoPhillips , the world’s largest independent oil and gas producer, beat analysts’ estimates for profit in the third quarter when it reported Thursday, citing higher oil prices but also cost cuts. Recent losses aside, some equity strategists consider oil to be in a bullish cycle and expect prices to rise further over the next year. Energy shares have sharply underperformed oil prices so far this year, suggesting there is room for shares to rise further. For graphic on US crude oil prices and energy ETF. “People are still thinking we’re at $40 a barrel oil. We’re not,” said Robert Lutts, president and chief investment officer at Cabot Wealth Management in Salem, Massachusetts, which owns shale producer Diamondback Energy  and other names. “People are misjudging the balance between supply and demand,” said Lutts, who sees oil prices heading towards $80 to $90 a barrel within a year. US crude settled at $67.59 . Even with the recent selloff, US oil prices CLc1 are up roughly 11 percent for the year to date, while the S&P 500 energy index is down about 8 percent for 2018 and market leader Exxon is down about 7 percent. Some money managers also consider energy shares to be more attractive buys now, with investors fleeing high-flying technology and Internet names in the recent stock market sell-off and seeking value-oriented names. Others say it is still too soon for a bullish call on energy. “To get a sustained move in oil stocks, where they consistently outperform other sectors and where the sector is actually growing as a component of the S&P 500, you need a lot of things like the supply constraint and global growth. We’re not there right now,” said Bucky Hellwig, senior vice president at BB&T Wealth Management in Birmingham, Alabama.