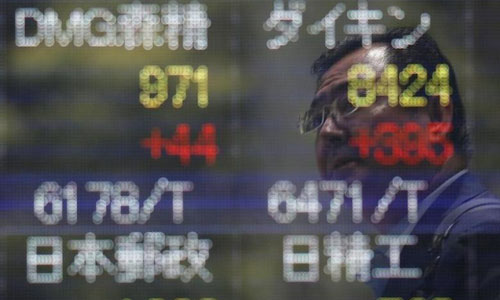 LONDON- Shares dipped worldwide towards three-week lows on Wednesday as a dour start to the U.S. earnings season weighed on sentiment, while Britain's battered currency rose for the first time in five days.
Sterling rose more than 1 percent versus the dollar and euro GBP= EURGBP= after British Prime Minister Theresa May offered to give lawmakers some scrutiny of the process of leaving the European Union. The currency has taken a beating, tumbling to 31-year lows last week, on fears that Britain is heading for a "hard Brexit" that would see it leave the EU's single market when it quits the bloc. "After weeks of tough rhetoric pushing sterling into a trading environment closer to an emerging market currency, the government may aim to stabilize markets, with its rhetoric and suggestions now possibly shifting in tone," Morgan Stanley's head of currency strategy, Hans Redeker, said. European shares followed Asian and U.S. markets lower, with Germany's DAX .GDAX, France's CAC .FCHI and Britain's FTSE .FTSE all nudging down in early trade. Sweden's Ericsson (ERICb.ST) led the region's technology stocks down to a one month-low after issuing a profit warning. That followed disappointing earnings reports from aluminum producer Alcoa (AA.N) and diagnostics test maker Illumina (ILMN.O) on Tuesday, casting a cloud over the start of earnings season and knocking U.S. stocks lower overnight. MSCI's broadest index of Asia-Pacific shares outside Japan fell to three-week lows .MIAPJ0000PUS, leaving shares .WORLD hovering near three-week lows touched on Tuesday. Markets' focus was turning to the minutes from the U.S. Federal Reserve's September meeting, scheduled for release later on Wednesday. Investors are increasingly convinced the Fed will raise interest rates in December while avoiding a hike at its next meeting less than a week before the U.S. presidential election. That speculation has pushed both the dollar and U.S. bond yields higher in recent days. The 10-year Treasury yield US10YT=RR touched 1.783 percent on Wednesday, its highest level since early June. U.S. interest rate futures <0#FF:> are pricing in about a 75-percent chance of a rate hike by December, little changed over the past couple of days. "Current sentiment is such that markets will look at the minutes for a reason not to expect a rate hike in December," Hermes group chief economist Neil Williams said. The dollar index, which tracks the greenback against a basket of six major rivals, slipped 0.15 percent to 97.531 .DXY after rising to its highest since March at 97.758 on Tuesday. Gold prices XAU= edged higher as the dollar retreated, and oil rose, drawing support from record Indian crude imports and upcoming talks between OPEC producers and other oil exporters on curbing output to end a glut in the global market. Brent crude futures LCOc1 were up 0.6 percent at $52.73 a barrel. -Reuters