Global shares rise, euro near 14-month high ahead of ECB 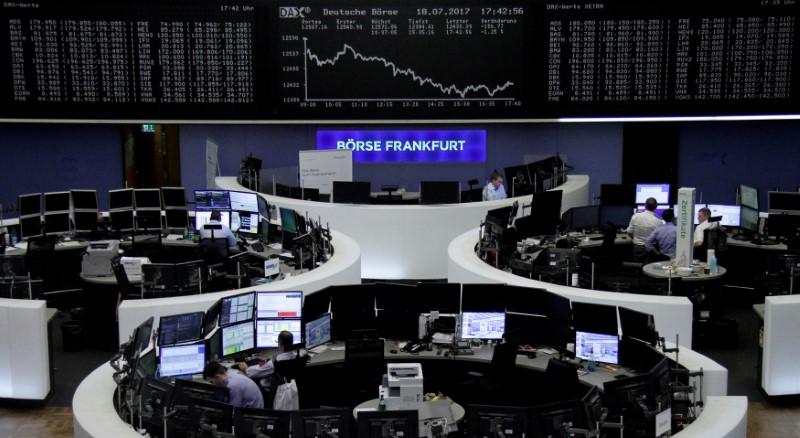 Global shares rise, euro near 14-month high ahead of ECB

LONDON (Reuters) - World shares extended a run of record highs on Thursday, as a cautious sounding Bank of Japan lifted Asian stocks to a near decade peak and Europe wagered on an incremental increase in confidence from the ECB at its latest meeting.

The euro was near a 14-month high and investors were riding a global rally in stocks as Asia's and then Europe's early 0.4 percent gains .FTEU3 ensured MSCI's 47-country All World index .MIWD00000PUS was up for a 10th straight session.

It is its longest winning streak since February 2015 and was showing little sign of fatigue even as bond yields - the key driver of global borrowing costs - edged higher again. [GVD/EUR]

They were lifted as oil prices LCOc1 held near 2 percent gains made the previous session when falling U.S. crude inventories gave the market a lift ahead of a key OPEC meeting next week. [O/R]

The day's focus though was squarely on the Japanese central bank's decision to push back its ambitious inflation target again and on whether European Central Bank head Mario Draghi would give a hint later that it plans to wind down its 60 billion-euro-a-month stimulus programme.

"I think the real action is going to be the September meeting. That is when we probably get a little bit of news on tapering."

ECB President Draghi opened the door to policy tweaks in a speech last month that was viewed as unexpectedly hawkish, sending the euro EUR= and government bond yields rallying.

"It may be as we approach "1.20, which is realistic let's be honest, that it generates a little more alarm for the ECB," Gartside added.

The yen meanwhile had weakened to 112.135 yen per dollar JPY=D4 after the BOJ pushed back its projected timing for hitting its 2 percent inflation target until 2020.

With both its main rivals down, the dollar rose for a second straight day climbing 0.3 .DXY against a broader basket of trade-weighted peers.

The other main mover was the Australian dollar AUD=D4 as it set a new two-year high, still heady from an upbeat sounding Reserve Bank of Australia earlier in the week. It eventually pulled back to trade at $0.7939 in Europe.

Gold XAU= slipped to $1,237 an ounce as the dollar pulled higher, while government bonds, also seen as safe-haven assets, saw modest selling ahead of the ECB meeting.

Southern European government bonds underperformed better-rated peers having closed the gap with Germany - the bloc's benchmark - to the tightest level in months in recent days.

Italian, Portuguese and Spanish government bonds are seen as the biggest beneficiaries of the central bank's ultra-loose monetary policy stance of the past few years, and some worry that the market is not fully reflecting the increased risk these countries now face if the ECB moves towards tighter policy.

"We have seen very little impact on peripheral spreads since Sintra but this could change very rapidly in a short period of time if the messaging is a bit too hawkish today," said DZ Bank strategist Daniel Lenz.