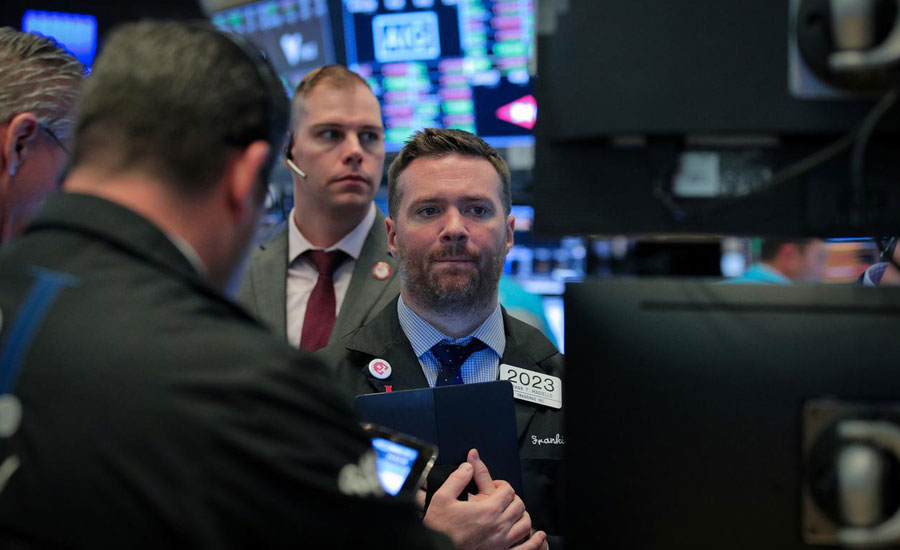 NEW YORK (Reuters) - US stocks ended nominally lower as investors awaited next week’s Federal Reserve meeting for signs of imminent easing, while the US-Iran confrontation in the Gulf of Oman added to geopolitical uncertainty, sending oil prices higher. Lingering worries over the US-China trade war also weighed on investor sentiment. Weak China data and a warning of a broad slowdown in chip demand from chipmaker Broadcom Inc were the latest signs of fallouts from the tariffs both countries have imposed. The upcoming Fed meeting, on Tuesday and Wednesday, was seen as pivotal for Wall Street, with stocks primed for a selloff if the Fed fails to take an even more dovish tilt after policymakers’ comments raised expectations for a rate cut in recent weeks. “There’s a lack of information to trade and the magnitude of the importance of the Fed next week can’t be overstated, so you don’t want to put any position on in front of something that has the potential to be such big news,” said Brian Battle, director of trading at Performance Trust Capital Partners in Chicago Positive US retail sales data helped boost the dollar and short-term Treasury yields. The Dow Jones Industrial Average fell 17.16 points, or 0.07%, to 26,089.61, the S&P 500 lost 4.66 points, or 0.16%, to 2,886.98 and the Nasdaq Composite dropped 40.47 points, or 0.52%, to 7,796.66. MSCI’s broad gauge of stocks across the globe shed 0.33%, while the pan-European STOXX 600 index lost 0.40%. Attacks on two oil tankers in the Gulf of Oman lifted oil prices, although they posted a weekly loss on worries a sluggish world economy could hurt demand. Growing worries about a US-Iranian confrontation set crude prices higher. US crude settled up 0.44% at $52.51 per barrel, with Brent futures gaining 1.1% to $62.01 per barrel. China’s industrial output growth came in well below expectations, slowing to a more than 17-year low, suggesting Beijing was feeling the sting of the protracted trade war with the United States.

EYES ON NEXT WEEK’S FED MEETING

A Reuters poll showed a growing number of economists expect the Fed to cut interest rates this year, although the majority still see it holding steady. “If they indicate they won’t or that they’ll wait and see, that’s going to hurt,” Battle, of Performance Trust Capital, said. “We’re going to be on pins and needles until we get some indication from the Fed.” The dollar index climbed to its highest level in almost two weeks after the retail sales data for May eased fears that the US economy is slowing sharply. The dollar index rose 0.58%, with the euro down 0.61% to $1.1206. The retail report also sent short-dated US Treasury yields higher, flattening the yield curve. Benchmark 10-year notes last rose 2/32 in price to yield 2.0839%, from 2.091% late on Thursday. Gold closed lower after hitting a 14-month peak earlier in the session. Spot gold dropped 0.1% to $1,341.23 an ounce.