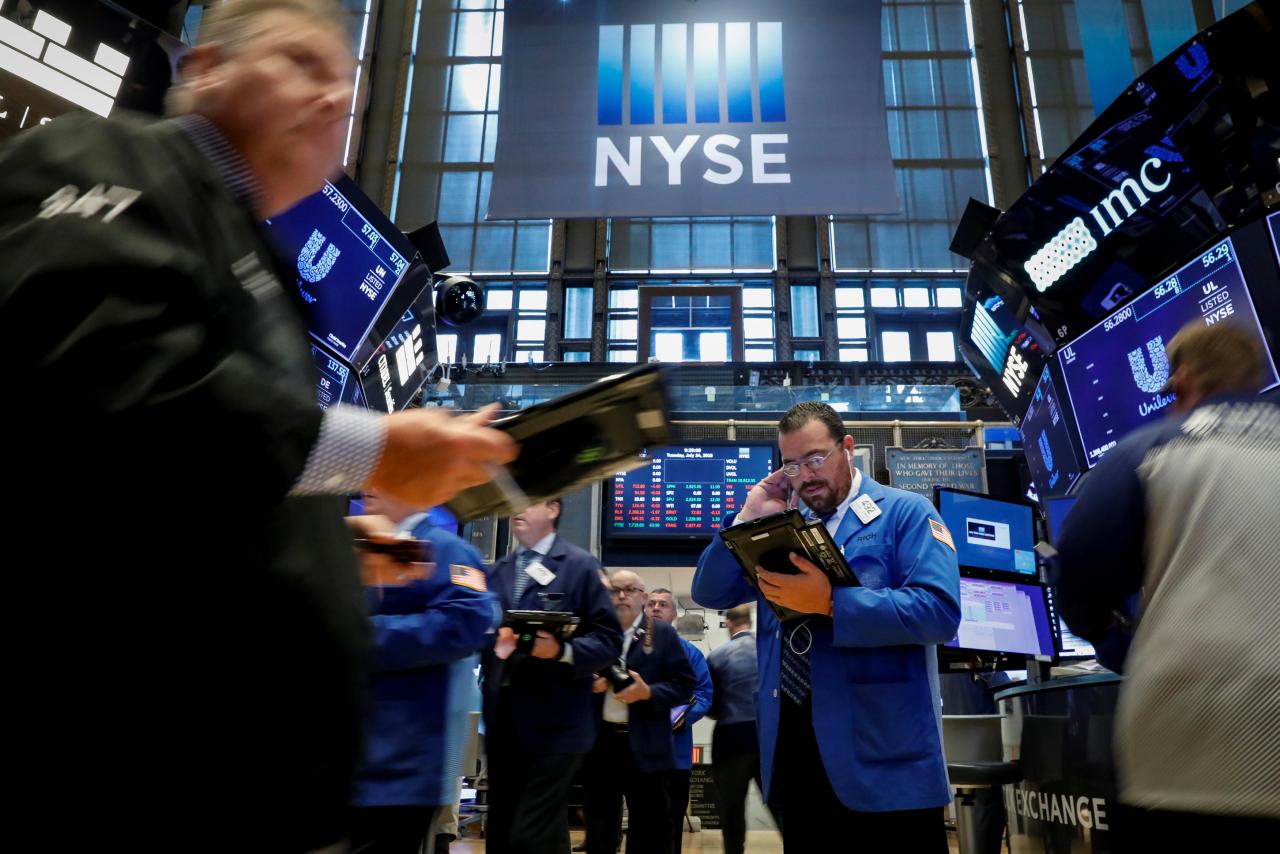 NEW YORK (Reuters) - World shares fell as corporate results and economic data failed to wow investors, leaving them to stew over trade tariffs and central bank policies. The MSCI All-Country World Index, which tracks shares in 47 countries, was down 0.20 percent, though it still marked its fourth weekly advance. Investors surveyed a host of second-quarter corporate results, punishing those that came up short, including Intel Corp, down 8.6 percent after its fast-growing data-center business missed estimates. Exxon Mobil Corp fell 2.8 percent and Twitter Inc sank 20.5 after their results. Data showed the US economy grew at its fastest pace in nearly four years during the second quarter, as consumers boosted spending and farmers rushed soybean shipments to China to beat retaliatory trade tariffs before they took effect in early July. But the economic growth figures were widely expected. “The terrible tariff talks has been a real damper on what has been a banner earnings season,” said Matt Schreiber, president at WBI Investments. “The markets should be higher right now.” The Dow Jones Industrial Average fell 76.01 points, or 0.3 percent, to 25,451.06, the S&P 500 lost 18.62 points, or 0.66 percent, to 2,818.82 and the Nasdaq Composite dropped 114.77 points, or 1.46 percent, to 7,737.42. Bonds did not sell off on positive news, either. Benchmark 10-year US Treasury yields slipped from their highest level in 1-1/2 months and last rose 4/32 in price to yield 2.9598 percent, from 2.975 percent late on Thursday. Rates markets await an important week of meetings at the US Federal Reserve and Bank of Japan (BoJ). Earlier speculation that the BoJ might tweak its policies rattled global markets. The bank’s aggressive efforts to keep yields in its own markets low has pushed investors to markets elsewhere, keeping a lid on yields worldwide. Japan’s 10-year government bond yield hit one-year highs even as the BOJ conducted special, unlimited buying for the second time this week that kept the debt’s yields from shooting higher. Helped by the yield spike, the Japanese yen strengthened 0.22 percent versus the greenback at 110.99 per dollar. Against a basket of currencies, the greenback fell 0.1 percent. US disagreements with its trading partners slipped from the headlines after an agreement on Wednesday to negotiate with the European Union, but Chinese markets still showed scars of the unresolved rifts. The main Shanghai index closed down 0.4 percent with the US-China standoff on trade still unresolved. Copper, which is sensitive to growth prospects especially in emerging markets, lost 0.75 percent to $6,244.00 a tonne. Oil, also sensitive to worldwide economic demand, sank. US crude settled 1.32 percent down at $68.69 per barrel, and Brent was off 0.34 percent to $74.29. Market analyst Hewson says: "While the prospect of tariffs on European cars has diminished, it hasn't gone away completely, which  means inevitably the market shifts its attention elsewhere. That elsewhere concerns what could happen next with respect to China, and  the prospect of an escalation there. " The Chinese offshore yuan fell to 6.855 per dollar, its weakest since June 2017, before rebounding to end stronger on the day. Earlier losses were cushioned by Chinese state banks’ trading to support the currency.