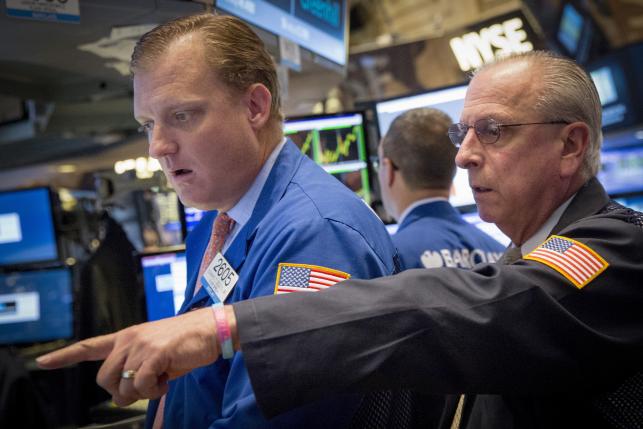 NEW YORK - Equities on world bourses ended the week lower on Friday after China's currency devaluation on Tuesday shook investors, though volatility declined late in the week, suggesting markets had absorbed Beijing's surprising actions. For the week, the MSCI All World Index fell 0.4 percent, its second consecutive weekly decline. China's modest devaluation of its currency dominated market activity, as the yuan lost 3 percent on the week, and investors were left questioning whether the move will continue to pressure the Japanese yen and other Asian currencies. U.S. stock indexes ended higher on the week, however, mostly on the strength of big gains on Monday. The S&P 500 finished the week up 0.7 percent. Oil prices rebounded from near six-and-a-half-year lows on Friday but were still expected to remain under pressure due to concerns about oversupply and weak global demand. The Dow Jones industrial average rose 69.15 points, or 0.40 percent, to 17,477.40. The Standard & Poor's 500 Index was up 8.15 points, or 0.39 percent, at 2,091.54. The Nasdaq Composite Index was up 14.68 points, or 0.29 percent, at 5,048.24. Crude oil prices slumped to the lowest since March 2009 before rebounding. Emerging market currencies slid to historic lows, with the Turkish lira and South African rand in the spotlight, as investors headed for the safety of developed world economies. The People's Bank of China set its midpoint yuan rate at 6.3975 per dollar before the market opened on Friday, slightly higher than the previous day's close of 6.3990. The yuan also strengthened in spot market trading, changing hands at 6.3908. "The engineered part of the devaluation seems to be over, but since market forces are meant to play a larger role, the yuan would drift lower," wrote analysts at Brown Brothers Harriman. "What we know is that the (People's Bank of China) will continue to manage the currency closely." Earlier on Friday, Greece's parliament voted to approve the country's third financial rescue by foreign creditors in five years. Prime Minister Alexis Tsipras still faces a confidence vote later this month. European stocks had their worst week in six, falling 2.9 percent, as shares of exporting companies with exposure to China fell after the yuan was devalued. The FTSEurofirst 300 index of leading European shares fell 0.1 percent on Friday. The Euro STOXX 50 traded down 0.7 percent. Economic growth in the euro zone slowed in the second quarter as France stagnated and Italy lost momentum, held back by an uncertain global outlook that is weakening investment even in powerhouse Germany. Crude oil futures fell to levels not seen since early 2009 before recovering slightly. U.S. crude oil settled up 27 cents at $42.50 a barrel after hitting a 6-1/2-year low of $41.35 a barrel due to a big increase in U.S. inventories. Brent was down 0.5 percent at $49.00. The U.S. dollar fell 0.1 percent against the yen to 124.27 yen and rose 0.3 percent against the euro, which fell to $1.1112. The greenback came under pressure this week as China's devaluation curbed expectations the Federal Reserve's long-awaited interest rate increase would come as early as its Sept. 16-17 meeting. But strong U.S. retail sales data on Thursday and good industrial production data on Friday backed the view that the Fed was ready to hike. The yield on 10-year U.S. Treasury notes rose to 2.20 percent after having fallen to a near four-month low of 2.04 percent on Wednesday. Gold prices were little changed on the day but up 1.9 percent for the week. -Reuters