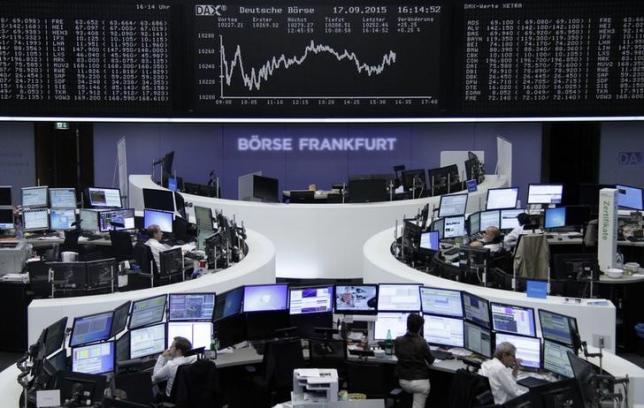 Stocks and currencies in emerging markets, which are more vulnerable to higher US interest rates, briefly welcomed the Fed's decision to postpone an interest rate rise, but their bounce faded with the persistent sell-off in developed markets.

Short-term lending rates, used as proxies for market expectations for the Fed's next move, shifted dramatically. December's fed funds futures contract rose to drop its rate to 21.5 basis points, implying only about a 44 percent chance of a rate increase by the end of the year.

"Investors are wrestling with how concerned they should be regarding global growth," said Jeremy Zirin, chief equity strategist at UBS Wealth Management in New York.

"The Fed has introduced a quasi-third mandate on global growth, apart from the labor market and inflation."

U.S. debt yields remained under downward pressure, with the US Treasury two-year note's yield at 0.678 percent, a day after it hit a four-and-a-half-year high of 0.819 percent.

The FTSEuroFirst index of the top 300 European shares closed 1.9 percent lower at 1,397.57 points, its biggest fall in two weeks.

A growing number of economists are now wondering whether the Fed will raise interest rates at all this year. A Reuters poll of the primary dealers in Treasury securities showed 12 of 17 now see the first rate increase in December.

Emerging market equities touched a one-month high before erasing their gains in late trading. MSCI's broadest emerging market index was down 0.1 percent, shaving its weekly gain to 3.0 percent which was still its biggest weekly increase since early April.

The US dollar recovered much of Thursday's loss following the Fed's decision. The dollar index against a basket of major currencies was up 0.7 percent at 95.239.