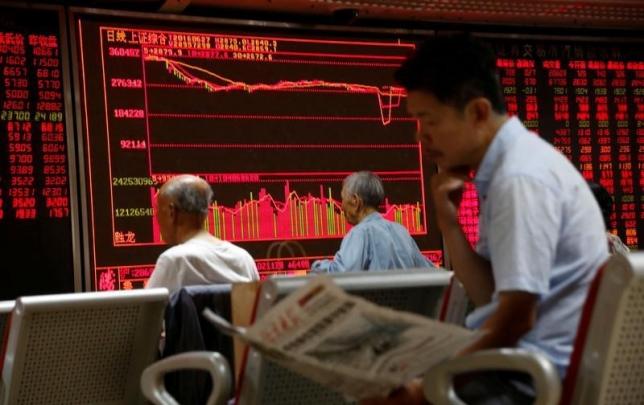 NEW YORK – World shares dipped for only the second time in nine days on Tuesday, sapped by a drop in oil prices and data that showed Britain's vote to quit the European Union dented German business confidence. European markets .FTEU3 fell 1 percent in early trading as the slide in oil to back below $57 a barrel sent commodity firms down 1.5 percent .SXPP[O/R][MET/L] and was then compounded by the softer German ZEW institute data. Rally fatigue had already set in overnight in Asia. Stocks failed to build on the latest record high for Wall Street while the safe-haven yen JPY=, government bonds DE10YT=TWEB and gold XAU= all made ground. Murmurings of central bank stimulus remained in the background. The Australian dollar AUD=D4 fell 1 percent to a 11-day low while the New Zealand dollarNZD=D3 hit a three-week trough of $0.7014, as investors ramped up bets that both central banks could cut their interest rates as early as next month. "The aussie and kiwi dollar are providing a bit of interest but the rest of the market is pretty moribund," said Saxo Bank head of FX strategy John Hardy, adding investors were now waiting on clearer signals on the health of the global economy. The IMF is due to update its World Economic Outlook in Washington later and the world's top finance officials from the 20 top economies (G20) are set to meet in China later this week. Ahead of that meeting the yuan nudged back up higher having been allowed to drop below the psychologically important 6.7 per dollar for the first time in over five years on Monday. Sterling GBP=, one of the biggest FX market movers in recent weeks, barely budged after British inflation rose more than expected in June thanks to a surge in airfares as soccer fans flocked to France for the Euro soccer championships. That data was collected almost entirely before Britons voted to leave the EU on June 23, a result that caused sterling to plunge and has raised the chances of a spike in inflation. CRUDE MOVES Turkey's lira TRY= and its stocks and bonds steadied as the dust settled following the weekend's coup attempt and despite a warning from Moody's that it may strip the country of its coveted investment grade rating. Pressure remained on crude oil prices after they settled down more than 1 percent on Monday, as rising stockpiles of crude and refined fuel intensified fears of another major supply glut. [O/R] Brent crude LCOc1 was 0.2 percent lower at $46.86 a barrel, after shedding 1.4 percent the previous session. U.S. crude CLc1 was also down 0.2 percent at $45.13, after dropping 1.6 percent overnight. "Traders and investors are torn which way prices are going to break. It's a knife edge between optimism and pessimism," said Ben Le Brun, market analyst at Sydney's OptionsExpress. Bucking the wider market trend, Japan's Nikkei stock index .N225 ended up 1.4 percent, as markets there played catch-up after a public holiday on Monday and responded to the recent drop in the yen and bets on more Japanese stimulus. Japanese policymakers will not go as far as funding government spending through direct debt monetization, but might pursue a mix of aggressive fiscal and monetary expansion to battle deflation, sources told Reuters. The dollar took a step back after climbing to more than three-week highs against the yen. It was last down 0.1 percent at 106.09 yen JPY=, after rising as high as 106.33 earlier in the session, its highest since June 24. The euro EUR= was broadly steady against the dollar at$1.1074. The European Central Bank meets on Thursday and it published lending data on Tuesday that showed a creep up in credit demand. –Reuters