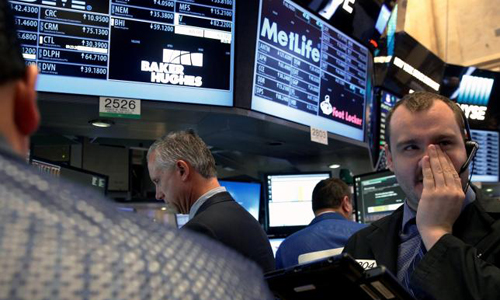 NEW YORK- Global equity markets slipped on Friday on investor fears about the outcome of Tuesday's U.S. presidential election, while oil prices fell on worries about surging inventories and whether OPEC members will adhere to planned production limits.
Election-related jitters sent the U.S. dollar to a more than one-month low against the safe-haven Swiss franc, while weakness in oil prices raised concerns about low inflation and pushed U.S. Treasury prices higher. A dismal outing for Asian and European share indexes weighed on MSCI's 47-country "All World" index .MIWD00000PUS, which was down 0.43 percent, finding little support from Wall Street. The S&P 500 .SPX ended lower for a ninth straight day, the longest losing streak for the benchmark index in more than 35 years, as investors stayed on edge ahead of the uncertain U.S. election. Investors have been unnerved by signs of a tightening presidential race between Democrat Hillary Clinton and Republican Donald Trump. Clinton had been thought to have a clear lead until the re-emergence last week of a controversy over her use of a private email server while secretary of state. "Investors are uncertain about the outcome of the election, and they have grown more uncertain since last Friday," said Walter Todd, chief investment officer with Greenwood Capital in Greenwood, South Carolina. An upbeat jobs report did little to distract investors from election-related worries. U.S. stocks posted modest gains as of the afternoon but lost steam to sell off into the close. "People just decided to liquidate going into the close to reduce exposure in case any more news hits over the weekend," said Michael O’Rourke, chief market strategist at JonesTrading in Greenwich, Connecticut. The Dow Jones industrial average .DJI fell 42.39 points, or 0.24 percent, to 17,888.28, the S&P 500 .SPX lost 3.48 points, or 0.17 percent, to 2,085.18 and the Nasdaq Composite .IXIC dropped 12.04 points, or 0.24 percent, to 5,046.37. European shares slumped, weighed down by weaker drugmakers after two U.S. lawmakers called on federal antitrust regulators to open an investigation of possible price fixing. Europe's broad FTSEurofirst 300 index .FTEU3 closed down 0.79 percent at 1,296.32. Oil futures notched their biggest weekly percentage decline since January, of around 9 percent, as signs of tensions resurfaced between Saudi Arabia and Iran that could scupper a key supply cut pact. Riyadh told a meeting of OPEC experts last week that it could raise oil output steeply to bring prices down if Tehran refuses to limit its supply, OPEC sources say. Traders also noted a surge in U.S. crude inventories last week and muted demand continued to weigh on futures. Brent crude LCOc1 settled down 77 cents, or 1.66 percent, at $45.58 a barrel, and U.S. crude CLc1 settled down 59 cents, or 1.32 percent, at $44.07. The weakness in oil prices raised concerns about low inflation and boosted U.S. Treasury prices. Uncertainty about the election also enhanced the appeal of the lower-risk assets. Benchmark 10-year notes rose 7/32 in price to yield 1.79 percent, US10YT=RR after yielding as high as 1.83 percent on the employment data. The U.S. dollar, meanwhile, hit a more than one-month low against the safe-haven Swiss franc on continued nervousness ahead of next week's election. The solid U.S. jobs report that supported expectations for a Federal Reserve rate hike next month did little to soothe traders' nerves. Gold steadied, heading for its biggest weekly rise since early June as jitters over the election offset the solid payrolls report. Spot gold prices XAU= were little changed at $1,304.30 an ounce. -Reuters